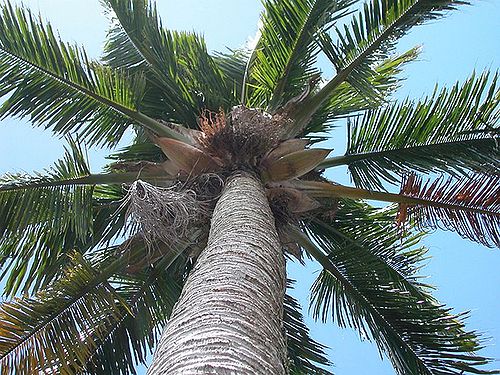 Beccariophoenix fenestralis (new name) is a spectacular, massive Coconut relative, that is rare and endangered.

Seeds: these seeds are slightly ovoid, about 1" x 3/4". on the tree, they were purple eggplant shaped fruit and when I cleaned them the husk reminded me of the outer layer of a coconut. they looked just like the attached photo from palmpedia. I am sure they are fertile because I have about 12 seedlings growing now from the last collection. based on the photo, I determined they were B. fenestralis. it is my understanding that all the Beccario's look the same as mature trees. (John Doughten)

Obviously this is a great palm for the tropics, growing fast, tall and extremely robust. In the more humid climates it seems wind and full sun hardy. However, in a drier, cooler climate such as southern California, this has been a struggle for palm enthusiasts for several decades now. Since it does survive there (it has a cold tolerance down into the 20Fs, but it doesn't like staying down there), it is grown very often, but few individuals survive to adulthood, nor look all that great trying to get there. This hapless palm is constantly struggling in California with chlorosis (particularly in hot sun), does very poorly in dry winds, and cool winters are very hard on it (plants generally stop growing completely and foliage appearance tends to decline). It is extremely prone to bud rot when tap water gets in the crown in cooler seasons. Now that there are two superior Beccariophoenix for California, maybe most palm enthusiasts will discontinue the palm torture and direct their energies elsewhere.