The Bangalow palm from Australia is mostly found in tropical to subtropical areas. 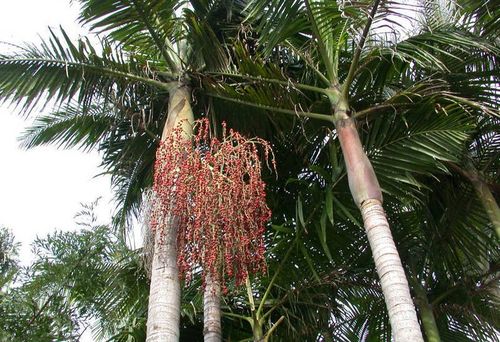 It is popular as an ornamental palm for its evergreen foliage and bright red fruit.

The Bangalow palm is a large-sized palm generally reaching 20-25 meters in height. It small red fruit is inedible. Propagation is by seed.

Tropical in nature, the Bangalow palm comes from warm humid forests. Due to this, it can not tolerate heavy frost. On the other hand, and unfortunately, the Bangalow palm has become a noxious weed in many areas where it has been used as an ornamental palm. In Southern Brazil, it has become an invasive species, profiting from the local extinction of the endangered native palm Euterpe edulis. In New Zealand, there is concern that A. cunninghamiana could invade native forests, since it has the same ecological requirements as the native nikau palm. The Auckland Regional Council has included A. cunninghamiana on a list of plants requiring further research on their potential to adversely affect the environment.

The name bangalow is aboriginal for "water carrying basket". The crownshaft can be fashioned, with a few deft folds and tucks, into a watertight vessel, the petiole used as the handle. (Image below).