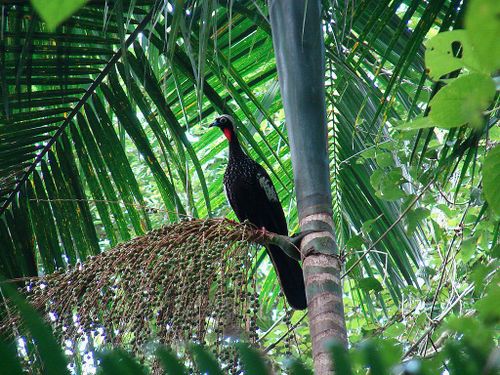 This species can form large stands on ridges and valley slopes, especially on quartzite and sandy soils. It also colonizes areas where the forest has been disturbed. (Gloria Galeano and A. Henderson)/Palmweb.

Plants from near Santa Theresa in Espírito Santo, Brazil, were described by Boudet Fernandes (1989) as a new species, Euterpe espiritosantensis. In our treatment we consider that the characters used to define the new species fall into the range of variation of Euterpe edulis. This taxon, like most other species in the genus, is wide ranging and variable, with many local races and forms. One interesting feature of this form is that the pinnae are sometimes loosely clustered. (Gloria Galeano and A. Henderson)/Palmweb.

"The main acai palm, euterpe oleracea is way too tropical and barely even survives in Southern Florida. Growing it in even the warmest and mildest parts of California is very, very difficult. However, I was surprised that there was a type of acai palm that grew in California. Euterpe Edulis fruits in Southern California and is about as hardy as a king palm. If you can grow a king palm in Northern California, there's a pretty good chance euterpe edulis will grow for you. If you're into fruit, this is definitely a worthwhile palm to seek out." (Dr. Axel Kratel) Cold Hardiness Zone: 9b