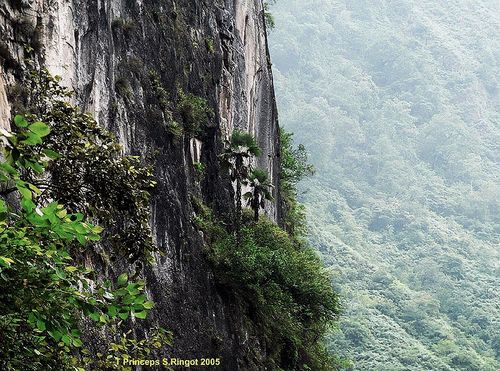 Princeps at Stone Gate. Photo by Ster.
made of mostly limestone. China, Yunnan, Nujiang county, 3 km NW of Bingzhongluo on the banks of the Nujiang, on the two almost vertical, bare marble cliffs of the Shi Men Guan (Stone Gate) and below the cliffs in mixed, evergreen monsoonal rainforest on a black, humus-rich, alkaline soil (pH 7.5-8); 1,550-I,850 m a.s.l. (M. Gibbons. 1995)/Palmweb.

This dioecious, palmate palm is fairly sought after in cultivation, not just because of its rarity, but its uniquely glaucous underside to the leaves, at least relative to the other Trachycarpus species. The leaves are nearly circular and finely/evenly split deeply. The color on top is a deep green with a hint of yellow in them, at least in full, hot sun. It tolerates full hot sun, and cold, a lot better than Trachycarpus latisectus and martianus, but not as well as the super hardy Trachycarpus species (fortunei, takil and wagnerianus). As a seedling it is a relatively fast grower, with long, thin petioles and somewhat V shaped leaves. As it ages, the leaves become more circular and the glaucous underside becomes somewhat more pronounced (though some seedlings show a dramatic white coloration to the undersides, this is not always the case). Adult palm leaves vary from a pale blue-green underside to nearly pure white. Trunks are about 6"-8"/15-20cm in diameter, and the palm supposedly tops out at around 30'/9m. The trunk tends to have retained, dead leaves over a loose, fibrous weave- not as prounounced as in T. fortunei, though. Editing by edric.

This is a moderately hardy palm, showing some cold damage at or around 25F/-3.8C in a Mediterranean climate. Whether or not it can tolerate a subtropical climate may not be known yet. It's growth is also moderately fast for a Trachycarpus, but not as fast as T. fortunei or takil. It appreciates lots of water, and seems to be tolerant of a variety of soil types. Though tolerant of hot, inland sun, it seems to appreciate a bit of protection from intense, dry heat.

Etymology: The specffic epithet (L. princeps; literally - a prince) refers to the stately bearing of this palm and the majestic way it looks down, from its lofty position on the sheer cliff faces.

Note: "With much confusion about what is a real princeps , we always declare provenance. To clarify the confusion regarding the various forms, this is the Golden Lotus Nursery statement: -Collecting seeds at the Stone-gate is mostly a waste of time. -So, I get the T. princeps from another mountain-area. That's why my seedlings have a blue colour!!!! The T. princeps from The Stone Gate are green.`` Our plants are grown from Golden Lotus seed and have the bluer leaf colouration. Whilst this plant is generally recognized as the `real princeps` it may turn out to differ to the true Stonegate form. Whether or not it is the true Stonegate form is irrelevant because the leaf colouration and white backs make it unique and highly sought after." (gardenpalms.com)

"This is a relatively new palm to cultivation (2006) but seed and seedlings have been available a few years now. It is characterized by a uniquely blue-white underside to the leaves, making it one of the more ornamental Trachycarpus species. I have a seedling that was in a liner until recently and it has yet to show the glaucous leaves (hope it's the real thing). But it is tolerating full hot, inland, southern California sun so far... better than T martianus and latisectus, both which prefer shade until older. Seems relatively fast compared to those shade lovers, too. There are two 'forms' of this species, both from the same area of China near the border of Tibet. One form is the quintessential stiff-leaved, white undersided form every one is clamouring for, and the other is a frail-leaved, greenish form that looks more like a Trachycarpus fortunei (sadly, that is the form I ended up with). May turn out to be two different species (they have to be in my opinion)." (Geoff Stein)

"I have had one for a number of years up in my Natchez, Mississippi garden (9a). It is in a shady spot (probably too shady), started as basically a seedling or 4in size, and is still relatively small. I never have paid much attention to it, no fertilizer or much irrigation for that matter. It has thrived but it is just a slow, steady grower. Pretty with its unique coloration. Certainly hardier than things like T. oreophilus which I lost two or three times (then gave up), and some of the other less hardy species like T. martianus and its various forms, as they do get leaf-damage at about 20F. But T. princeps has always held up well. I think it is now three times that it has been subjected to 2-3 continuous days of sub-freezing temps with a low of about 18F." (Michael Norell)