Nansei-shoto. A single species on Ishigaki Island (Yonehara) and Iriomote Island (Hoshitate, Nakam River,Sonai, and Yoeyama Group of the Ryukyus). Growing on hillslopes or more rarely near the sea; often growing in densemore-or-less even-aged stands. 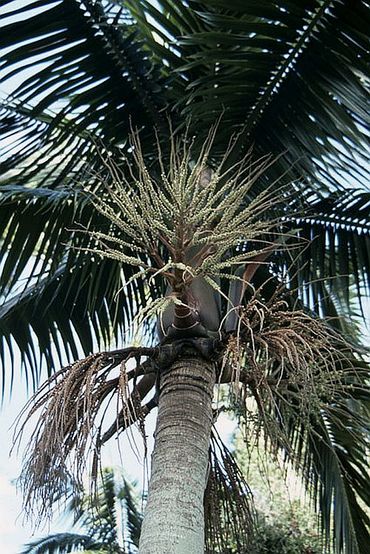 Pintaud and Setoguchi (1999) were the first torecognise that the inflorescence of Satakentia has twopeduncular bracts, a character it shares with Carpoxylon butnot with Neoveitchia. However, the inflorescences and fruit ofthe three genera are similar. Moderate solitary pinnate-leaved palm from the Ryukyu Islands in southern Japan, remarkable for the two large peduncular bracts and small fruit. (J. Dransfield & N. Uhl & C. Asmussen & W.J. Baker & M. Harley & C. Lewis, Genera Palmarum. The evolution and classification of palms. 2008)/Palmweb.

Stems are tall and solitary, ringed with prominent leaf scars, and usually have a mass of adventitious roots at the base. Leaves pinnate, 10-14 in number, and dead leaves fall cleanly from the stem. leaf sheaths are closed and form a prominent, brown or reddish green crownshaft. Petioles are usually very short. Leaflets are numerous, regularly arranged, one-veined, lanceolate, and spread horizontally in the same plane. Inflorescences are branched to two orders, and are borne below the crownshaft. They are covered initially by deciduous bracts - a prophyll and two peduncular bracts. Flowering branches are densely hairy. Flowers are unisexual and are arranged in trees or a central female and two lateral male flowers. Fruits are small, ovoid or ellipsoid, black, and one-seeded. The endosperm is homogeneous, germination is adjacent, and the seedling leaf is bifid.

Satakentia liukiuensis can survive freezing temperatures to about -3.8°C (25°F), but freezing is best avoided. This species naturally occurs on islands in moist montane forest, and is heavily effected by the surrounding sea temperatures, which are constant and often form sea mist and cloud. In this type of natural environment temperature fluctuations are slight, and this palm prefers a constantly mild climate with little temperature difference between day & night, and Summer & Winter. Under extreme freezing conditions we recommend you keep this palm as dry as possible, and well wrapped up.

Uses: Cultivated as an ornamental. The ‘cabbage’ is said to havebeen eaten during World War II.

Trunks have a mass of adventitious roots at the base, and trunks can grow to 20 m.tall, brownish/grey, and solitary, topped with a prominent, brown or reddish green crownshaft, which is very distinguishable. With large green pinnate leaves, 3 m. long. The inflorescence's are also distinctive, which are branched to two orders, and are borne below the crownshaft.

Satakentia contains only one species, which is endemic to Japan in the far south of the Ryukyu Islands in the islands of Ishigaki Jima and Iriomote Jima. This genus was named by Harold Moore for Toshihiko Satake, who had noticed it was something special. There is now a museum built to honor Toshihiko Satake within the main population of the palms on Ishigaki Jima. There are two main wild populations, the main population on Ishigaki Jima, and a much smaller population on Iriomote Jima with a few individual trees scattered across Iriomote. The Iriomote trees are inaccessible, as they grow in a cemetery, or the isolated trees are remote in the hills.