Rhopalostylis baueri is found on the Kermadec Is., Norfolk Is., and is a species of Indigenous palm, Kermadec nikau (N.Z. only), 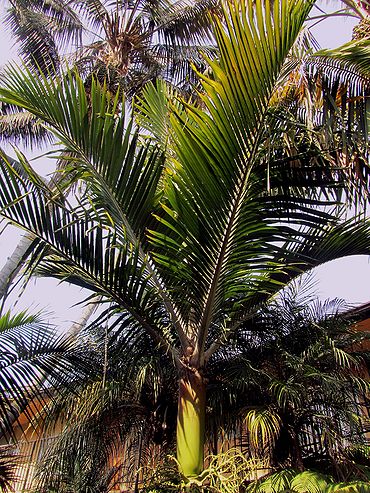 Rhopalostylis baueri reaches 12 m or more in height. The pinnate leaves are 3 to 4 m long, on a stout, erect petiole (leafstem) approximately 20 cm long. The crownshaft is 50-60 cm long. The inflorescence is 30 50 cm long and has from 50 to 60 fairly stout branches. The fruits are green at first, turning a bright red when ripe, and are a favorite food of the endangered Norfolk Island Parakeet. The growing tip of the palm was used by early settlers as a vegetable and is said to have tasted like a nut when raw and like an artichoke bottom when boiled. It is much faster growing than the New Zealand nikau, Rhopalostylis sapida. There is a Rhopalostylis bauer which is on the notable tree list 2002 beside the Cricket Pavilion at Pukekura Park.

In the southern hemisphere outside its habitats, R. baueri is cultivated in mainland New Zealand as a faster-growing alternative to the otherwise similar R. sapida, the Nikau Palm, the only other species in the genus Rhopalostylis. It is also grown in the Australian states of New South Wales, Queensland, Victoria, and Western Australia. In the northern hemisphere excellent cultivated specimens are found on the coasts of the southeastern Azores and Madeira, which offer similar climates to those of the species' origin. The species is also grown outdoors in coastal California, Hawai'i, continental Portugal and Spain, the Canary Islands, and in parts of the Mediterranean basin (e.g., Palermo, Italy).

PROPAGATION TECHNIQUE: Easily grown from fresh seed. Seed should be soaked in water to remove flesh and then sown over a damp peat/coarse sand mix and left in a shaded spot (ideally in a mister) and ignored. Fruit may take up to a year to germinate. Frost tender. Plants resent root disturbance so they should be planted in a sheltered semi-shaded site and then left alone. (nzpcn.org)