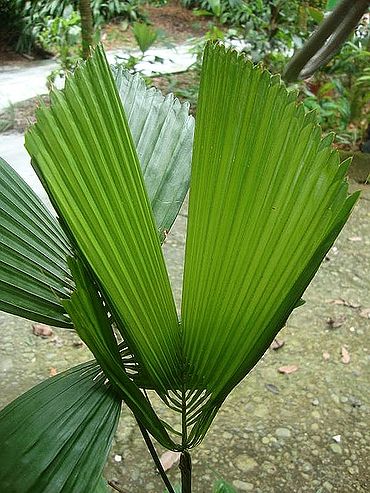 Shady, sheltered and moist, but well drained. Zone 9b

A palm with unusually divided leaves resembling a Christmas bow belongs in the genus Reinhardtia. The tiny “windows” at the base of the leaflets identify this species as Reinhardtia gracilis. (Palm key Images)

"The windowpane palm is called that because the leaves are fishtail shaped and have small holes in them near their base. This is a palm I have tried several times to grow here in the San Fernando Valley above Los Angeles, and it WONT grow here. There are a few pockets in the So Cal area where you can grow this palm (has to be protected from frost and low humidity). It is a very slow palm, and snails love it. Tap water tends to cause it to brown-tip badly. It is really a better palm for the tropics. Suckering palm with stems about 3-4' tall and 1/4" thick." (Geoff Stein)

"A small and dainty palm from rain and cloud forests of southeastern Nicaragua to northwestern Colombia. Reinhardtia gracilis has leaves with usually only two broad leaflets per side that have distinctive "windows" at the base. The var. rostrata is distinguished by its bigger leaves and seeds. Under humid and shady conditions it is easily grown and develops quickly into an exceptional container plant or a most stunning understorey palm for the subtropical or tropical garden." (RPS.com)

Dr. Andrew J. Henderson, Field Guide to the Palms of the Americas.