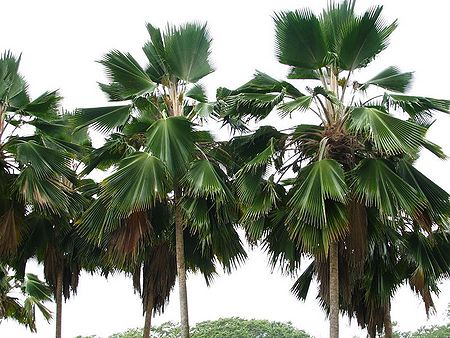 At a mall in Hilo, Hawaii. "compare to P. thurstonii, which has long inflorescences that extend beyond the leaves." Photo by Geoff Stein
and Vanuatu. Known only from cultivation, typically around sites of human activity, sometimes escaping and groWing wild in nearby secondary growth, Marshall Islands, Solomon Islands, Vanuatu, Niue, Fiji, Tonga, Samoa, French Polynesia, 0-100 m elev. Native to Tonga (ʻEua and Vavaʻu) and appears to be an ancient introduction to Fiji, Samoa, the Marquesas, and Tokelau. Introduced and commonly used in the Hawaiian Islands in landscapes. Here pictured in Waipahu (Waipiʻo), Oʻahu, Hawaii.

Pritchardia pacifica is native to Tonga. It is also found on Fiji, Samoa, and the Marquesas however these populations are likely to be human introductions. (Dr. P. Goltra)

Pritchardia pacifica is distinguished by its rounded, undulate leaf blades with stiff segment tips and abaxial surface more or less devoid of lepidia, inflorescences shorter than or equaling the petioles, and small S-38 fruits. Perhaps the most widely cultivated species of the genus in tropical landscapes and gardens, it is among the most handsome of palms. Truly natural populations of Pritchardia pacifica are unknown. Dennis and McQueen (1989) reported it groWing wild on Nggela Island north of Guadaleanal in the Solomon Islands but referred to it as P. wood(ordiana, a name of no botanical standing. Pritchardia pacifica has erroneously been reported to be growing wild on Eua Island in Tonga (Lister 1893, Beccari & Rock 1921, Watling 200S), but the species there is actually P. thurstonii. Burkill (1901) reported P. pacifica on Vavau Island of Tonga, but I have not seen the specimen at K to verify its identity. (Hodel, D. 2007)/Palmweb.

Cold hardy to USDA Zone 10, however plants generally dislike temperatures below 55-60 degrees F., and may not survive when temperatures dip to near freezing. Best grown in moist, well-drained soils in full sun to light shade. Grows well as a houseplant in a sunny room. Containers may be taken outside in late spring when warm temperatures arrive. (Missouri Botanical Garden)

Etymology: Pritchardia name is dedicated to William Thomas Pritchard (1829-1907), British official stationed in Fiji in the 19th Century, British counsul in Fiji, adventurer, and author of Polynesian Reminiscences in 1866. The specific epithet in Latin means of the Pacific Ocean.

Uses: In Fiji the leaves of Fiji fan palm were traditionally used as fans, known as Iri masei or Ai viu, that were only used by the chiefs. A light, flexible wood was used to construct a border for the leaves that grow up to 90 cm in width. In Fijian the term Ai viu refers to both a fan and an umbrella as the leaves of Fiji fan palm were used for protection from both the sun and the rain. The leaf was held immediately above the head when it was raining in order and the rain rolled off the leaf behind the head. The trunk of this species was occasionally used for ridge-beams. This species was associated with the upper classes and only one or two trees were usually found in a village, as these plants provided enough leaves to meet the material needs of the village chiefs. (Dr. P. Goltra)

Hodel, D. 2007. Many Special Thanks to Ed Vaile for his long hours of tireless editing and numerous contributions.