This species is endemic to Peninsular Malaysia, only known from the environs of 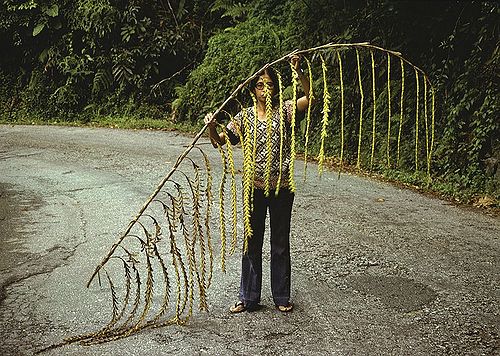 This is a robust solitary rattan growing to 60 m tall (Dransfield 1979). Most specimens have been found on hillslopes in lower montane dipterocarp forest.

It was previously thought to be endemic to the Tapah forest area although another collection (Yap s.n.) collected in 1985 was made at Fraser's Hill. Population size is not known.

Conservation: Plectocomia dransfieldiana is only known from Tapah forest and Fraser's Hill, giving a very small extent of occurrence (EOO) of 430 km2. With the ongoing conversion of forest to plantations it is plausible to consider this species as under present and future threat. The restricted range meets the threshold for the endangered category and the small number of locations, continuing decline of habitat and lack of adequate protection indicate that Endangered is an appropriate listing for this species.

This species occurs within the vulnerable Peninsular Malaysian rain forests ecoregion (IM0146) (WWF 2001). The main reason for forest loss in this region is large-scale clearing for plantations of mainly rubber and oil palm for export production. In Malaysia an estimated 180,000 ha of land are being converted to palm oil production every year, and it is estimated that by 2022 there will be 5.6 million ha of land associated with palm oil production (USDA FAS 2011). This may in fact be the limit to the growth because there will be no more suitable land for production.