New Guinea. Orania lauterbachiana is the most widespread species in New Guinea. 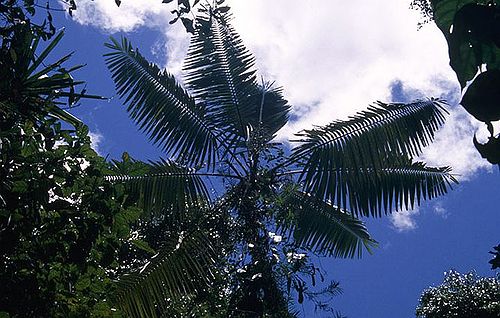 Victory Junction, Gulf, Papua New Guinea. Photo by Dr. William J. Baker, Royal Botanic Gardens, Kew/Palmweb.
It is found throughout the mainland and on a nearby island. In Papua this species is known from Sorong, Etna Bay-Fakfak and surrounding the Taritatu (formerly Idenburg) river. In Papua New Guinea it is known throughout the country from Western Province to the most eastern part (Milne Bay Province) including Normanby Island. So far, it has never been collected from other nearby islands. In ridge forest from lowlands up to highland tropical forest from 10 - 820 m altitude. (A.P. Keim and J. Dransfield. 2012)/Palmweb.

Tropical in its requirements. Cold Hardiness Zone: 10b+

Uses: The trunk is used as floorboards for houses.