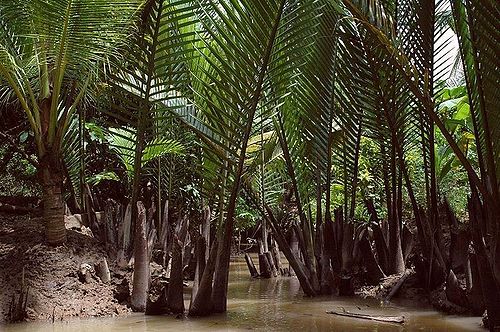 This species ranges from Sri Lanka and the Ganges Delta through to the west Pacific. In South and South-East Asia it is found in Bangladesh, Brunei Darussalam, Cambodia, China (Hainan Island), India, Indonesia, Japan (the most northern distribution is Iriomote Island), Malaysia, Myanmar, Singapore, Sri Lanka (where it also has a range extention due to planting), Thailand, and Viet Nam. In Australasia, it is found in northwest and northeast Australia, the Federated States of Micronesia, Guam, Palau, Papua New Guinea, Solomon Islands. (iucnredlist.org)

The species has been introduced to Cameroon and Nigeria in West Africa and to Panama in Central America and Trinidad and Tobago in the Caribbean. In much of its native range it has been planted and exists in large or small-scale plantations. It is unknown if inclusion of plantations would be representative of the natural range. (iucnredlist.org)

This species is found in the upstream estuarine zone in low, mid, and high intertidal regions (Robertson and Alongi 1992). It forms extensive belts along brackish to tidal freshwater creeks and rivers. It is very fast growing, especially in fresh water, and is a competitive species. In Papua New Guinea, Nypa fruticans dominates vast areas of the upper Fly River and other south coast estuaries with high tide river water salinities of 1-10 o/oo (Robertson et al. 1991). The species occurs at similar positions in the Sunderbans Delta of India, which has a relatively high rate of sea-level rise, but this species is blocked from inland migration owing to coastal development, and its area and occurrence has been declining (K. Kathiresan pers. com)

The large fronds are pinnate (feather-like) and usually 3 to 6 (sometimes up to 10) metres long, arising from the base of the plant. Leaflets number up to 120 per leaf, are 60-130 cm long, with a shiny green upper and powdery lower surface. The petiole (leaf stalk) is smooth, shiny and 1-2 m long with a bulbous base enclosing the stem. Leaf bases are below ground, although they are sometimes exposed by erosion. The yellow inflorescences are on long, sturdy stalks arising from the base of the plant. The female inflorescence is a densely packed, spherical head of flowers. The male inflorescence is a club-shaped spike of closely arranged flowers emerging from lateral stalks below the female inflorescence. The large spherical fruiting body is 30-45 cm in diameter. Individual fruits (carpels) are egg-shaped, angular, fibrous, 10-15 cm long, 5-8 cm wide and dark brown. Each fruit holds one egg-shaped seed. Propagules are crypto-viviparous

The nipa palm has a trunk that grows beneath the ground (acaulescent), and only the leaves and flower stalk grow upwards above the surface. Thus, it is an unusual tree, and the leaves can extend up to 9 m (30 ft) in height. The flowers are a globular inflorescence of female flowers at the tip with catkin-like red or yellow male flowers on the lower branches. The flower yields a woody nut, these arranged in a cluster compressed into a ball up to 25 cm (10 in) across on a single stalk. The ripe nuts separate from the ball and are floated away on the tide, occasionally germinating while still water-borne. Editing by edric.

Nypa may seem to be a particularly difficult palm to accommodate in the average palm collection, but our experiences with it indicate that this is not necessarily so. It may never grow into the handsome giant one sees in the wild but a perfectly acceptable, if smaller, specimen can be easily achieved.

Uses: The long, feathery leaves of the nipa palm are used by local populations as roof material for thatched houses or dwellings. The leaves are also used in many types of basketry and thatching. Large stems are used to train swimming in Burma as it has buoyancy. On the islands of Roti and Savu, nipa palm sap is fed to pigs during the dry season. This is said to impart a sweet flavour to the meat. The young leaves are used to wrap tobacco for smoking. In the Philippines and Malaysia, the flower cluster (inflorescence) can be tapped before it blooms to yield a sweet, edible sap collected to produce a local alcoholic beverage called tuba, bahal or tuak. Tuba can be stored in tapayan (balloon vases) for several weeks to make a kind of vinegar known as sukang paombong in the Philippines and cuka nipah in Malaysia. Tuba can also be distilled to make arrack, locally known as lambanog in Filipino and arak in Indonesian. Young shoots are also edible and the flower petals can be infused to make an aromatic tisane. Attap chee (Chinese: 亞答子; pinyin: yà dá zǐ) (chee meaning "seed" in several Chinese dialects) is a name for the immature fruits—sweet, translucent, gelatinous balls used as a dessert ingredient in Thailand, Malaysia, and Singapore. The nipa palm has a very high sugar-rich sap yield. Fermented into ethanol or butanol, the palm's large amount of sap may allow for the production of 6,480-15,600 liters (per year) of fuel per hectare. Sugarcane yields 5,000–8,000 liters per hectare (per year) and an equivalent area planted in corn would produce just 2000 liters (per year) per hectare. The flower stalk of Nypa fruticans can be tapped, yielding a sweet sap. This sap can be drunk as is, boiled to produce a brown sugar or fermented to form alcohol or vinegar. The young fruits are often eaten as a desert in Singapore. Nypa fruticans, known as rola, is a dreaming or totemic plant for some Tiwi people. Large mud mussels (Geloina coaxans) that grow around the base of the stems in deep mud are eaten after roasting.