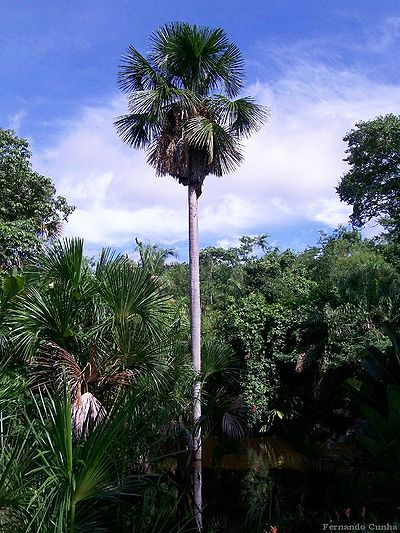 throughout the island of Trinidad and South America east of the Andes (Bolivia, Brazil, Colombia, Ecuador, Fr. Guiana, Guyana, Peru, Surinam, and Venezuela); found at elevations below 500 m, typically growing on swampy or seasonally flooded lands with poor drainage and acid soil; often forms dense, almost pure stands with up to 645 indiv/ha.

Solitary palm. Up to 35 metres in height, with petioles up to 6 m long, the large leaves form a rounded crown. Fruit is a chestnut colour and is covered with shiny scales. The yellow flesh covers a hard, oval, nut. The seeds float, and this is the means by which the palm tree propagates. In natural populations the tree reaches very high densities. Editing by edric.

Aguaje should be planted at least eight meters apart, preferably ten meters, and kept free of weeds, in full sun. This dioecious species grows slowly, and can be mixed with many other tree and crop species as long as it is not under shade. It tolerates some flooding, and will mature in about ten to fifteen years. Several mature male palms should be kept in the field to help maintain good fruit production from the females. Aguaje palms are commonly protected in homegardens and around villages, where they grow from discarded seeds. Due to concerns over the destruction of aguaje in the wild, the planting of aguaje in agroforestry systems is now being promoted throughout the region.