Endemic to Sri Lanka. In moist closed forest, between 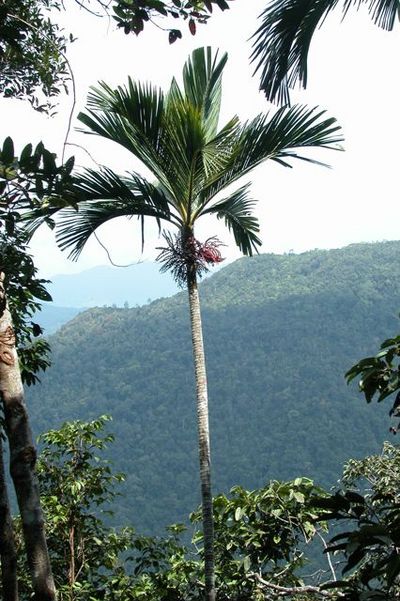 Here is some information on Loxococcus rupicola for you all, I have recently heard that Scott Zona has done some DNA analysis on this species there at Fairchild and Montgomery Gardens and found its closest relative is Dictyospermum album!

Loxococcus rupicola grows at between 400 and 800 meters above sea level. Their home terrain is very much like the big granitic boulder country we are familiar with in and around Mount Lewis (where you'd see Archontophoenix purpurea and Linospadix apetiolata naturally growing!) They appear to like growing in constantly wet soil but it is also well drained! And I think the more friable and loamy the sand the better! I think they might not like waterlogged soils! They can grow at low land elevations but demand shade and humid conditions to keep healthy!

They only grow in localised colonies, not numbering more than 30-40 individuals (mature) but with hundreds of baby seedlings forming thick carpets underneath the parent trees! At most I think surveys done by the Sri Lankan Forestry Dept there reckon they are no more than 1000 trees in total! There are 2 main colonies and a third (isolated) colony in the deep interior not easily accessible!

It's interesting to note the highest diversity of leech species lives there with them, anywhere in the world! Even though its not a very big forest its certainly one of the wettest!! It rains almost every night there, and is misty with low clouds rolling in after 3 PM on a daily basis!

The name of the park where the entire population grows is called Singharaja National park.

Seeds are now being produced from 2 commercial nurseries based in Kandy (since mid 1990's) and the main one is called Samarakoon nursery!

Although this palm comes from the tropics it can be grown in the sub tropics in a protected area but it will not like low humidity and it seems to like plenty of moisture around the root system, so keep it well mulched.

I hope this information helps, and answer a few questions.