Endemic to the Seychelles. Natural stands of the Coco-de-mer are only found on the 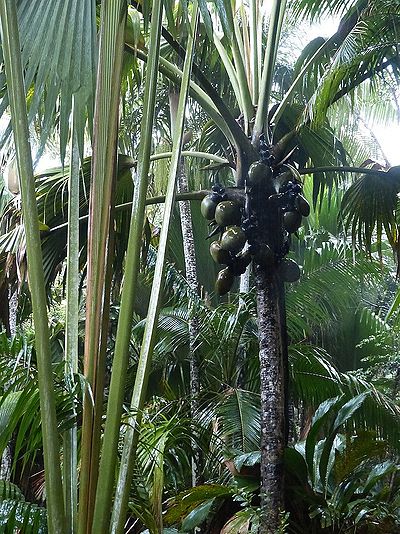 Vallée de Mai, Island of Praslin, Seychelles. Photo by Philippe.
islands of Praslin and Curieuse, in the Seychelles. It is extinct on St Pierre, Chauve-Souris and Round Islands. Planted subpopulations occur on Mahé and Silhouette Islands. (bgci.org)

Conservation: Endangered. The main threats to this species are harvesting and poaching, fires (human induced and wildfires), infrastructure development, and introduced taxa (such as pathogens and parasites). Its restricted range, and slow growth rate.

Uses: The Coco de Mer fruit is edible, but is not commercially available due to the restricted distribution and difficulty in cultivating the plant. The jelly-like flesh of Coco de Mer was considered to have medicinal properties. The empty shells are carved into vessels and bowls; large ones have been carved into stools and table bases. (eol.org)

This palm has the longest leaves and the largest and heaviest seeds of any plant in the world. The plant may grow up to 34 metres in height, with leaves up to 10m in length and 4m in width. The male and female flowers are borne on separate trees and the male catkins can reach 1 metre in length, making them the longest in the world. It also has the largest female flowers of any palm species. The seeds can weigh as much as 30 kg. Producing the largest seeds in the plant kingdom (weighing up to 30kg), (although cultivated pumpkins, Cucurbita maxima, with heavier weights have been recorded) this giant of the plant world was known to sailors in the Indian Ocean long before its real home was discovered. Over the ages, seeds of this legendary palm were found washed up on deserted beaches or floating on the waves and they become known as the 'coconuts of the sea' appearing to come from some mythical oceanic plant. Their suggestive two-lobed form gave rise to many legends – including a belief that they possessed aphrodisiac powers. However, the plant now faces several threats: from over-collection, alien invasive species, and an increasing frequency of fires, which is being exacerbated by climate change. The true home of this mysterious plant is the Seychelles, where only two populations remain in the wild. Much prized, coco-de-mer seeds have commanded high prices for centuries. Trade in the seeds is now closely controlled, but poaching remains a problem because of their high value on the tourist market. Although protected within National Parks, the two remaining populations are nevertheless threatened by fire and encroachment by invasive plants. (bgci.org)

When European sailors recovered the first of these giant seeds floating in the Indian Ocean they were thought to be produced by plants growing below the sea. Later, their origin was believed to be the Maldives Islands south of India from where they got their name. Today, it is well known that a tall, sturdy fan palm with a thick trunk and stiff, costapalmate leaves, native only to two islands in the Seychelles, produces these gigantic nuts, the largest seed of any plant, weighing between about 5 and over 20 kg. The seed is not very difficult to germinate but it produces a very long "sinker" that anchors the base of the palm and the first leaf deep into the soil. It thus needs a very tall container or should best be planted directly in the ground in its permanent position. The first leaf takes many months to appear and subsequent growth is very slow. Despite these drawbacks, this palm has always been much sought after. Viable seeds have always been in short supply and are now nearly impossible to obtain because the endosperm (the "seed") of nuts originating in the Seychelles is listed on CITES and banned from international trade without proper permits. The reason for this is not the plant trade, but the superstitious use of the endosperm as an aphrodisiac in Asia. Despite the protection measures, illegal trade in Lodoicea seeds is still flourishing and thinly shaved endosperm slices are readily available in shops in Hongkong and elswhere at astronomical prices. At the same time, very few nuts still get to germinate in situ in its natural habitat in the Seychelles and the wild stands are showing signs of aging. (RPS.com)