Australia. Western Australia. In the Kimberley Region confined to the Mitchell Plateau to as far south as Doongan Stn. Grows in a strongly monsoonal climate in open woodland, usually on flat sites or depressions and forms extensive colonies, 100-380 m alt. Soils are lateritic in origin. (Dowe, J.L.)/Palmweb. 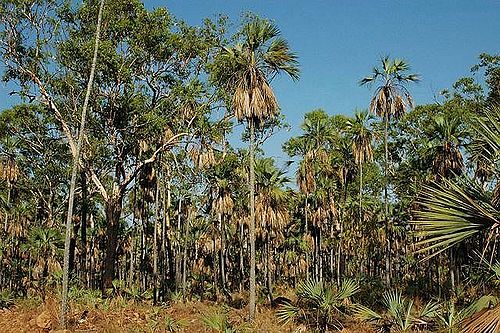 Livistona eastonii was described by Gardner (1923) from Lower King Edward R. in Western Australia, and named for William R. Easton, who directed the Kimberley Exploration Expedition in 1912 of which Gardner was the botanist. Gardner cited no specimens in the protologue, and Rodd (1998) chose Gardner 1544, a specimen collected from the Lower King Edward R. in Western Australia, as the lectotype. Livistona eastonii most closely resembles L. humilis, but it is distinguished by its larger size, and by not having sexually dimorphic inflorescences. Wilson (1992) described L. eastonii as dioecious, but provided only a description of ?male flowers?, and noted that the ?female flowers? were not seen, however providing an illustration of a ?female inflorescence?. Livistona eastonii is a moderate sub-canopy palm to 15 m tall; leaves are moderate and regularly segmented; segment apices are rigid, and with a bifurcate cleft to 63% of the segment length; the inflorescence is unbranched, not extending beyond the limit of the crown, and with up to 6 partial inflorescences; bracts are tubular; flowers are cream to yellow; fruit are obovoid to ellipsoid, to 16 mm long to 9 mm wide, and glossy purple black at maturity. (Dowe, J.L.)/Palmweb.

"The palm Livistona Eastonii is entirely restricted to the North Kimberley. It occurs as a dense understorey in open eucalypt woodland. Where is has been removed during bauxite exploration, it has failed to regenerate. The Traditional Owners regard it as a sacred `lalayi` (dreaming) tree. It occurs in ancient rock art, testimony to its significance." (Alex Petersons)

Livistona eastonii on the Mitchell Plateau of northern Western Australia forms a dense, multi-aged understorey to an open eucalypt woodland. The palm population has the characteristics of a species that comprises a climax vegetation type. Reproduction of the palm appears to have been stimulated in recent years, perhaps by annual burning. The present palm population has been reproducing throughout its life with only minor though significant fluctuations. The average maximum age is estimated to be about 280 years, based on an average increment of 2.85 cm/year for plants taller than 30 cm and 1.15 cm/year for the first 30 cm of height growth. Exceptionally tall plants of 21 m (Gardner 1923) and 10.4 in (Beard 1976) may be about 720 years and 360 years old respectively. (Australian Journal of Ecology, By R. J. HNATIUK.

A medium-sized, slender fan palm native only to the Mitchell Plateau in the Kimberley Ranges in northern Western Australia, where it grows in open, seasonally dry Eucalypt forest, occasionally in very dense stands. It forms a very slender, solitary trunk which with age can reach 20 m tall and supports a small, open crown of stiff leaves on long stalks. It is particularly well adapted to fire, which is a rather frequent occurrence in its habitat and helps the palm to compete with Eucalyptus and other trees. It is rarely seen in cultivation, perhaps on account of its slow growth, but would make a nice, robust and drought tolerant ornamental for the small, tropical garden. (RPS.com)