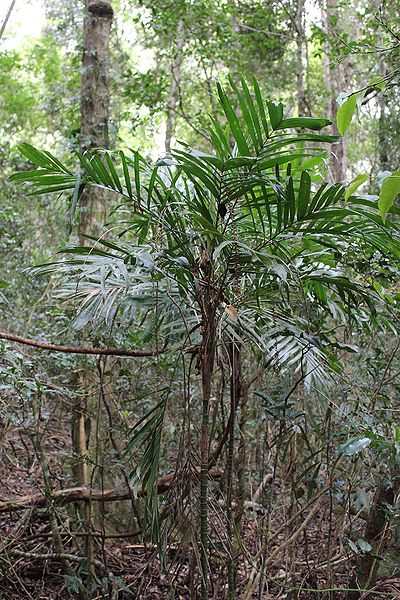 In montane rainforest, Lamington National Park, north Queensland, Australia. Photo by tanetahi
26˚05'S to John's Mt. just north of Taree (NSW) at 31˚30'S. In rain forest from sea level to 1200 m elevation, primarily on basalt soils, less common on metamorphics and alluvial soils. (J.L. Dowe. 1997)/Palmweb. "Mountainous rainforest in north-eastern New South Wales and south-eastern Queensland. It occurs in very wet areas of the ranges, in rainforest at moderate altitudes ( up to 1200 metres). The wettest areas would receive over 3,000 mm rainfall per year. They grow as an understorey plant, and are usually found in dense shade, never receiving any direct sunlight. In some locations there would be 6-8 plants per square metre." (Daryl O'Connor)

The microclimate in these positions is cool and humid due to the deep shade provided by the canopy. Even in summer, the temperature would not rise above 25 ° C. In winter the temperature would not rise above 13-14 ° C. The minimums would be down to 2 or 3 ° C in winter. Due to the abundant vegetation, frosts would be extremely rare if not non-existant. They grow alongside Archontophoenix cunninghamiana, and Calamus muelleri is nearby as well. The soil never dries out, and is usually very rich with humus etc.

They grow all down the ranges to central New South Wales, and at these more southern locations the temperatures would be cooler. They are frequently cultivated in Sydney, but do not experience any extremes of temperature. I have heard that they will tolerate some frost. They don't like hot sun, and to look at their best need good shade cover. In the rainforest, their leaves are a deep green colour. In semi-shade they change to mid green, and lose a lot of their character.

Martius' (1837) protologue for L. monostachyos (as Areca monostachya) refers to an unnumbered A. Cunningham collection from the Hastings River, New South Wales. This collection appears to be no longer extant, and therefore Martius' illustration Tab. 155. figure 4 has been designated here as the lectotype. Linospadix monostachyos is a common species occurring in the rain forests of southern Queensland and northern New South. It is the largest species of the genus in Australia, and is distinguished by pointed angular/pyramidal staminate buds, mature flowers that are approximately twice the size as those in other species, globose fruit, and solitary habit. (J.L. Dowe. 1997)/Palmweb.

"Seed germinates within 1 month if fresh. It should be cleaned and soaked in water for one day. Greater than 90 percent germination rate. Seedlings are very slow initially and very tender. Should be handled very carefully at this stage. Once seedlings reach 150-200 mm high, they are more durable and the growth rate increases. Plants are now reasonably hardy. Plants love to grow up out of the pot, leaving them weak rooted and wobbly. Suggest using deep pots, but place seedling lower down in pot to compensate for upward movement. This avoids repotting until plant is big enough to actually use a larger pot. Constant topping up of potting mix or repotting keeps roots strong and plants healthy. Fertilize as for most palms, although don't expect to get good growing rates. Once palms are 450 mm high, plant out in deep shade, protected from wind, in rich soil. Wind turns leaftips brown, and leaves lose their luster. Once in the ground and established, palms grow at a reasonable rate. The more shade, the larger the leaf and better appearance." (Daryl O'Connor)

Under the new international rules of botanic nomenclature, the correct name of the plant is Linospadix monostachyos

Etymology: The genus name is a combination of the Greek words "linos" = thread, rope, and Latin "spadix" = to draw, or pull, and the species name "monos" = alone, unique, and "stachys" = spike, both in reference to the inflorescence being a single spike.

Uses: Stem once used for walking-sticks and umbrella handles. The small knob at the base of the stem is often carved to form an ornate handle.