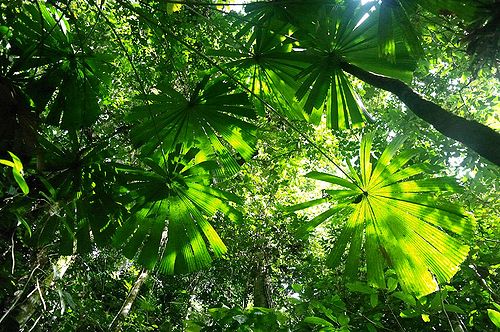 "Relatively large species from New Guinea with a hint of cold hardiness. Grows up to 20 of stem (narrow) and long, arching, pinwheel-like divided fan leaves with irregular leaflet widths. Excellent as a large potted palm." (Geoff Stein) Editing by edric.

Licuala ramsayi and Licuala lauterbachii have lots of similarity, and look identical to an imature gardener. It needs to be examined properly to identify morphologically. For us, both the palms till many years look identical, and it was difficult to give individual identity to mixed seedlings. I asked one of the palm experts about the difference between both plants, he answered that both the plants are from different countries and habitats. Is that answer is enough? No certainly not. Both are solitary, slow growing and have circular multi segmented leaves and similar growth rates, and their identities are quiet confusing, if kept at different locations, but some major morphological difference are there in both the species. The leaf of licuala lauterbachii is much dark green than L. ramsayi, L. lauterbachii has a narrower and flatter leaf segment than licuala ramsayi. The leaf petioles of L. lauterbachii are covered with brown to dark brown hairy pigments, where as the leaf petioles of L. ramsayi is green. Flowering of L. lauterbachii starts at the early stage in potted plants but the same aged L ramsayi has no indication of inflorescence yet, so the growth rate of L. lauterbachii remains stunted in long terms if flower spikes are not detached from the plants. The spines in L. lauterbachii are like scorpion stingers where as in L. ramsayi are simple and straight. We have been providing similar treatment to both the plants, and both are doing well. (Mayflower's Nursery)