Bahamas, Cuba, Florida, Haiti, Leeward Is., and Puerto Rico. Widespread and common in 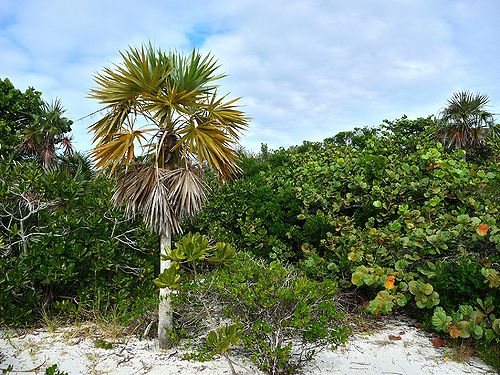 "Growing in the sand dunes in Bahia Honda State Park." Florida keys. Photo by Kyle Wicomb
the Caribbean region, Leucothrinax morrisii occurs across a range of habitats in Florida, the Greater Antilles, and the western Lesser Antilles. (C.E. Lewis and S. Zona. 2008)/Palmweb.

Leucothrinax morrisii is one of the most familiar cultivated palms of the Caribbean region and is also found in tropical gardens and conservatories worldwide. Its status as a distinct, monotypic genus had been, until now, unrecognized, as it shares many visible features with Thrinax excelsa, T. parviflora and T. radiata. Using molecular tools that were unavailable to earlier taxonomists, we were able to show a clear distinction between Leucothrinax and related palms. (C.E. Lewis and S. Zona. 2008)/Palmweb.

Slow growing, this mid-sized palm has a slender, smooth trunk and circular, fan-shaped leaves with silvery undersides, arranged in a dense crown. It is native to the Florida Keys and much of the Carribean region, where it grows in open woodlands and coastal areas. It will thrive in any open situation in subtropical and tropical climates and prefers a well drained, calcareous soil. (RPS.com)

Conservation: It has a conservation status of “least concern” (Zona et al. 2007) under the World Conservation Union criteria (IUCN 2006). Nevertheless, it represents unexpected diversity in the Caribbean palm flora and suggests that further phylogenetic research may uncover additional surprises. This research must be done quickly, as many Caribbean palms are in rapid decline, along with the threatened areas they inhabit (Zona et al. 2007). (C.E. Lewis and S. Zona. 2008)/Palmweb.

Lewis, C.E. & Zona, S. 2008. Leucothrinax morrisii, a New Name for a Familiar Caribbean Palm. Palms 52(2) 84-88. Many Special Thanks to Ed Vaile for his long hours of tireless editing and numerous contributions.