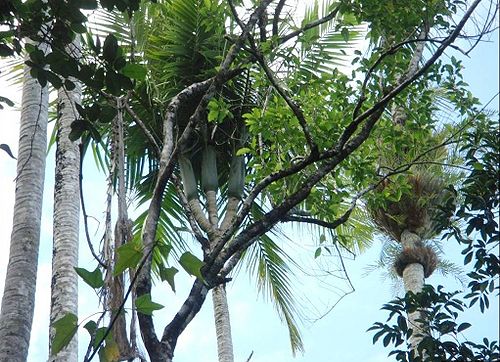 Very rare three headed specimen, Boghen, New Caledonia.
to Col des Roussettes on the west side, and from Canala (not recently seen) to Kouaoua on the east side., on volcanic rocky substrate, of ultrmafique sediment. Ecology: A gregarious species, Kentiopsis oliviformis is an emergent tree in transitional, semi humid Aleurites forest only, where it occurs on schists and basalts often mixed with serpentine colluvium. In valley bottoms in the Tindéa-Boghen area, there are numerous populations, each nearly forming a pure stand of 0.1-1 hectares, (usually on flat land along a temporary stream)or within which there is no regeneration due to continuous leaf fall from tall (25-30 m.), mature trees. Regeneration occurs only on the periphery of each stand, where mature trees are more widely spaced. Mature trees become even more widely spaced, farther out from the center of each population then disappear altogether or on adjacent hillsides and valley slopes. In the Koh region of Kouaoua under a more humid climate, but also around Farino, K. oliviformise scapes from valley bottoms and is scattered on well-drained hilly slopes. (J.-C. Pintaud and D. Hodel. 1998)/Palmweb.

They like moderately filtered light when young, full sun when mature (hence the term emergent palm), and lots of water, and a sub-tropical rather than tropical climate. Usually thought to be slow growing, but several plants in south-east Queensland as well as Hawaii, have displayed an impressive growth rate. Cold Hardiness Zone: 9b with canopy when young.

Conservation: Kentiopsis oliviformis is endangered (Jaffté et al. in press). All populations are in areas under agricultural pressure; none have normal regeneration. In the Tendéa-Boghen area with several populations exceeding 1000 individuals, regeneration is very low due to cattle grazing; dramatic population reduction is expected here. The government of the South Province of New Caledonia has established an experimental, fenced area near Boghen to exclude cattle from one stand of K. oliviformis. However, these measures need to be greatly expanded to protect these and other populations adequately. Clearing of forests and harvesting trees for the edible cabbage or palm heart have much reduced populations near Kouaoua, La Foa, and Bourail. (J.-C. Pintaud and D. Hodel. 1998)