Endemic to the Norfolk Is. 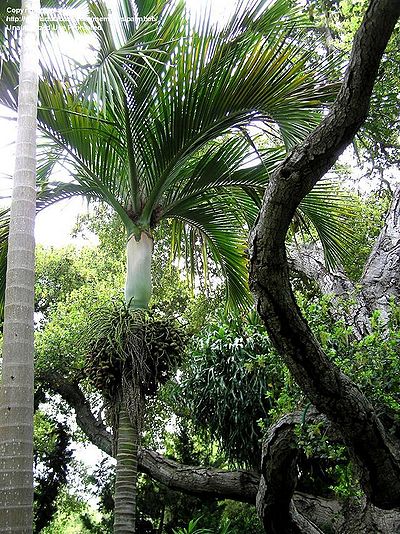 H. canterburyana is a slow-growing palm up to 10 metres tall which grows on mountain forests, cliffs, and exposed ridges overlooking the sea, at about 400 to 750 metres of altitude. It has a slender, close-ringed trunk, a prominent silvery crownshaft and a compact crown of dense, dark green, stiffly arching recurved fronds somewhat reminiscent of those of Howea belmoreana. The egg-shaped fruit are deep red when ripe, and about 4 cm long. They appear in densely bunched fruiting spikes from below the crownshaft. Each fruit contains a single seed.

Lord Howe Island has a subtropical climate. Summers are mild to warm with regular rain, and winters are wetter and somewhat cooler. Average maximum temperatures range between 17C and 20C in winter and from 24C to 27C in the summer. In winter, Average minimum temperatures range between 12C and 15C, and 18C to 22C in summer. Humidity averages in the 60 to 70 per cent range all year round. With its arching fronds, H. canterburyana is a very attractive palm which is becoming increasingly popular among garden enthusiasts in cool subtropical and warm temperate climates. It is difficult to grow in the tropics or where nights are never cool, but does well in climates like Sydney and Auckland, and can tolerate the occasional light frost once established. It needs a rich organic soil, and shelter from sun for at least the first five years. It also does well in containers or as indoor plants where light is good. Single plants are capable of producing fertile seed. Fresh seed is slow and erratic in germination, with seedlings appearing from five to 18 months after they are sown. Fruit take up to four years to ripen and it is not easy to tell when the seeds are ripe. (Dransfield, John, Natalie W Uhl, Conny B Asmussen, William J Baker, Madeline M Harley, and Carl E Lewis 2005)

Hedyscepe canterburyana, the Big Mountain Palm or Umbrella Palm, is the sole species in the genus Hedescepe of the Arecaceae family. It is endemic to Lord Howe Island, Australia and is threatened by habitat loss. It is a solitary palm with a distinct crownshaft, and bears unisexual flowers of both sexes. With the Rhopalostylis palms of Norfolk Island and New Zealand it forms the botanic subtribe Rhopalostylidinae. If differs from Rhopalostylis in minor floral details including having more than six stamens, and in being protandrous rather than protogynous. The two genera were formerly included in Archontophoenicinae until a revision in 2005. (Dransfield, Uhl et al., 2005)