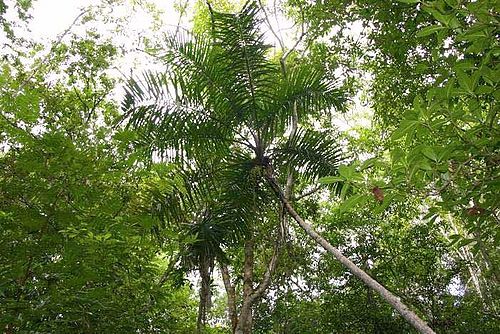 Gaussia maya are 5 to 20 metres tall. Stems are gray, 10 to 15 (sometimes 30) centimetres in diameter. Trees have six to eight pinnately compound leaves. Fruit are red, 1 to 1.5 cm in diameter. Hight 30', 12" diameter, Solitary; canopy of 5-7 leaves in the crown, leaves are erect from trunk 8'-10' long & arching. Its most notable feature is its flowering habit, which can result in up to a dozen inflorescences being on a plant at any one time. Editing by edric.

HARDINESS ZONES: 10B-11 (severely damaged or killed at 26 degrees F). Likes a shady, moist, well drained position as a youngster, but can take more sun as it grows.

Formerly known as Opsiandra maya, the maya palm requires warmth and a steady supply of moisture for best growth, but is quite tolerant of a wide range of soil types. It makes an attractive specimen despite its relatively sparse crown of ascending leaves. It will tolerate full sun, but looks best if situated in part shade. The leaflets are arranged in many planes, giving the leaves a plume-like appearance which helps offset their small number. The first inflorescences of the maya palm remain in bud for several years as the trunk continues to grow, producing additional inflorescences above them. At some point, old and young buds begin to open sequentially from oldest to youngest, with the result that maya palms usually carry flowers and fruits at the same time and at all stages of development. Maya palm does have a reputation for blowing over in high winds. Three other species of Gaussia are known, from Puerto Rico, Mexico and Cuba.

This fast growing species from Southern Mexico, Guatemala and Belize is easy to grow in pot or in the garden under a warm temperate to tropical climate. The seeds in the round, bright red fruits germinate easily, and seedling growth is fast. The early swollen base is distinctive, as are the attractive grass-green feather shaped leaves. Not often offered for sale, and should be more widely grown. (RPS.com)

Conservatiuon: Species is classified as vulnerable, and is threatened by habitat destruction and degradation.