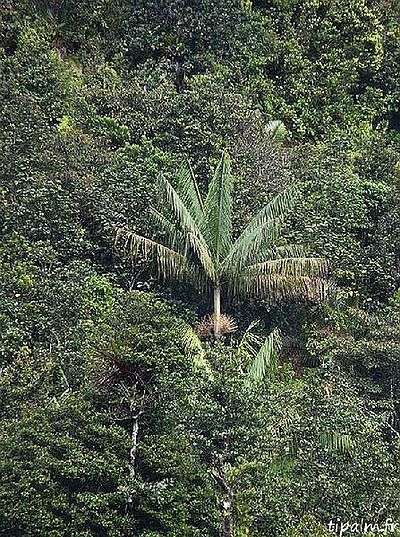 There is some variation in indument. Leaves of specimens from Trinidad are the most scaly, ramenlose, and punctate, and the leaves have a dense covering of black scales; specimens from Tobago and the Lesser Antilles are less scaly, ramentose, and punctale, and the leaves have whitish brown scales. It is interesting that three species of Euterpe (E. broadwayi, E. oleracea, and E. precatoria) occur on the small island of Trinidad, and remarkable that E. broadwayi has not been found in Venezuela [although Wessels Boer (1988) believed it may occur there]. This species has an unusual distribution for a palm; two other species, Syagrus amara (Jacquin) Martius and Aiphanes minima (Gaertner) Burret, have somewhat similar distributions. (Gloria Galeano and A. Henderson)/Palmweb.

Euterpe broadwayi in Guadeloupe: (formerly E. dominicana). Abundant on the neighboring island of Dominica, located between the two French departments, this palm is very rare among us. On Martinique, only a very few grow, including the Morne Morne Lorrain and Jacob, in the northern and mountainous island, never below 400 m altitude. In Guadeloupe, several stations are now known, such as on a mountainside called "Mama Petit-Bourg" in the valley of Carbet, near the second fall, and the Moreau River valley. This is a palm unrecognized, yet beautiful, one of the largest and most beautiful that populate the Lesser Antilles. It has large leaves and regular leaflets drooping, gushing at the end of a long white petiole, extended smooth and straight trunk, ringed in its upper part. In response to a steep and extremely humid environment, it develops a cone of adventitious roots bright red, very characteristic. (Gloria Galeano and A. Henderson)/Palmweb.

Uses: The palm heart is eaten, and is in much demand in some places.