From the high plateau of Madagascar and first "discovered" at the Vakona Lodge. In 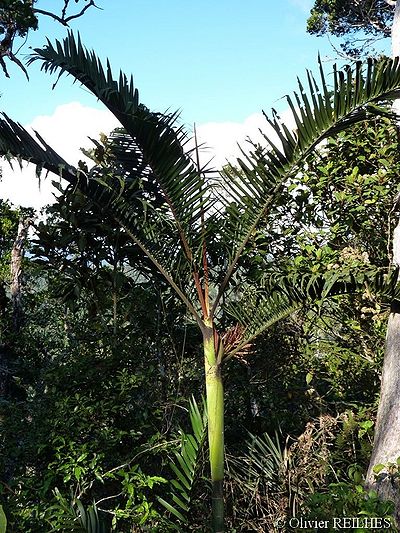 Using common names, especially when given to Dypsis, ends up becoming a lesson in frustration and confusion. Like D. sp. 'white stem,' D. sp. 'black stem' has come to mean different things to different people. The palm pictured on this page, although given the D. 'black stem' by some, is also the same palm that was later known as D. sp.'Vakona Lodge," which has subsequently been positively identified as a variation of D. baronii.

The palm initially called D. 'black stem' in California is apparently turning out to be D. psammophila. And it is possibly there are other species which have been given this name in different locations worldwide when a black stem or black petiole is apparent in a Dypsis species.

When photos of this palm were first made available, it created quite a ruckus. As it is such a stunning palm, and because nothing like it had been available at the time, many "theories" as to its ID began floating around. Seeds were collected in early 2007 and were grown for sale in a Hawaiian nursery. Those few survivng plants are now in a few gardens in Hawaii and California and may soon begin to produce seed of their own. Around about 2011-12, a trained palm botanist in Madagascar positively identified it as D. baronii which was already known to have some variabiltiy. It will soon be known the extent to which the unique coloration of this palm continues to display outside of its native habitat. And any particular cultural needs will become apparent as well. It can be said so far that it grows great in Hawaii, but may struggle somewhat in So. Cal. Time will tell.