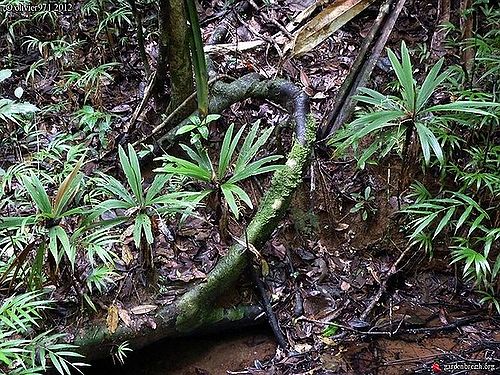 S. This taxon was included in the folders of D. louvelii in the Paris Herbarium. However, the inflorescence has a relatively shorter peduncle and the sometimes zigzag rachis gives the inflorescence a different appearance, but it is the staminate flowers which immediately separate the taxon from D. louvelii. There are six biseriate stamens, in form reminiscent of those of D. nodifera. The two collections from the lower Mangoro are clearly conspecific; the collection from Andasibe differs slightly in having a zigzag inflorescence rachis. (J. Dransfield & H. Beentje, The Palms of Madagascar. 1995)/Palmweb.

Conservation: Critically endangered (ICUN Redlist). Known from three widely separated locations but the species was not recorded since 1925 in Andasibe and Mahanoro area. The recent collection is from Andilamena where fewer than 20 individuals have been recorded. Based on this population information, this species is listed as Critically Endangered (CR). It would probably also qualify for CR under criterion C2a(i) but that requires additional data on the population structure. Surveys are required to determine if this is the only remaining population and if so, urgent steps are required to prevent it from going extinct. This is a very rare palm with fewer than 20 individuals recorded. The population trend is unknown but possibly declining. The main threat to this species is habitat loss through clearance for shifting agriculture and logging. There are also impacts to the habitat from illegal ruby mining. The species does not occur in any protected areas. Further surveys are required to see if the species occurs elsewhere. Given the small population size, urgent action may be required to prevent this species from going extinct.(Rakotoarinivo, M. & Dransfield, J. 2010-12-17)

A dwarf palm from the understorey of high altitude rainforest (to 1000 m (3300 ft) a.s.l.) in eastern Madagascar. It is similar to D. louvelii. Its thin stems are only about 5 mm (1/5 in) in diameter and the crown consists of a few small, bifid leaves. This plant was believed to be extinct and has not been seen in the wild for over 70 years, let alone introduced into cultivation. It would do well in tropical and subtropical climates and probably also make a nice potted plant. (RPS.com)