Endemic to Madagascar. Widespread throughout all humid forested areas. Lowland and 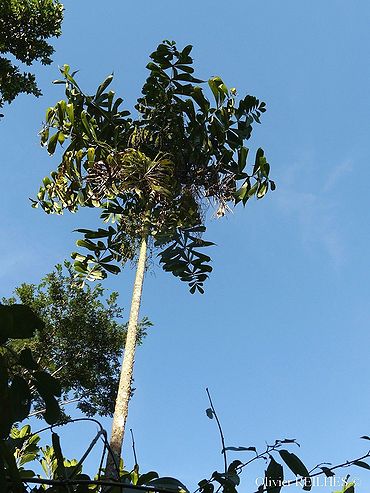 Prefers shade as a youngster, although it can take full sun as its gets older. Likes the standard moist, but well drained potting mix. Growing Climate: -Temperatures from 0.C to 35.C. Cold Hardiness Zone: m10a

This is a handsome palm that has become quite widespread in cultivation outside Madagascar. The great altitudinal and latitudinal range of the species suggests that there may be considerable variability of value for the selection of different strains to suit particular gardening climates. D. pinnatifrons is superficially very similar in habit, inflorescences and, especially, leaf form to D. nodifera. If staminate flowers and/or fruit are available, then there is no difficulty in separating them, for the former has three stamens and a seed with homogenous endosperm while the latter has six stamens and a seed with ruminate endosperm. There do appear to be good differences between the seedlings at about the six-leaf stage, D. pinnatifrons with numerous leaflets that are already clearly grouped and divergent within the groups, each leaflet abruptedly narrowed at its tip and D. nodifera with entire leaves or with parallel-sided leaflets that are not obviously grouped and divergent. This apparent difference needs confirmation. The species epithet, pinnatifrons, meaning pin-nate-leaved, would be appropriate for many a palm in Madagascar but was probably appropriate when it was first published to distinguish the species from the other two species of Dypsis known at that time (D. forficifolia and D. hirtula). (J. Dransfield and H. Beentje. 1995)/Palmweb.

D. pinnatifrons is fortunate to be among the most widespread of all Dypsis species, occurring up and down the length of Madagascar, particularly on the eastern side, and in both lowland and montane forest. It is also quite attractive, with slightly sigmoid (S-shaped) leaflets arranged in groups along the rachis. This solitary palm at maturity reaches 8 to 39 ft. in height and 1¾ to 6 in. in diameter. New leaves open red to maroon in color before turning a dark, glossy green. The range of latitudes and altitudes in which D. pinnatifrons is native led Drs. Dransfield and Beentje to conclude that various strains of the species could be selected to suit specific climates in cultivation. However, in southern Florida, the high pH of most soils make this a palm better-suited to container culture. Its IUCN Red List conservation status is Least Concern, with a stable population trend. (fairchildgarden.org)