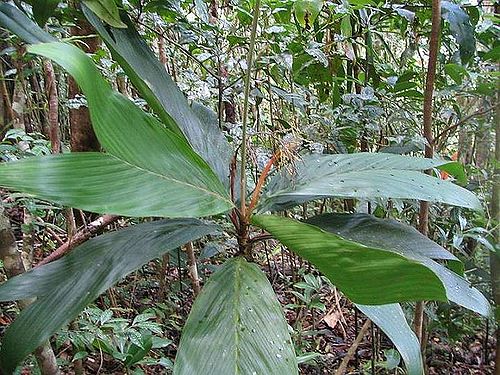 Initially we identified this palm as Dypsis lanuginosa, previously known only from a single specimen. On closer examination, however, the newly collected material proved to have six stamens rather than three, and other features such as the long silky more or less straight, rather than twisted, hairs, fewer rachillae, with more distant triads, and the presence of elongate ramenta on the undersurface of the leaf, added evidence that the present species was undescribed. (J. Dransfield and H. Beentje. 1995)/Palmweb.

Warm, sheltered and moist. Easily grown in tropical, as well as sub-tropical areas. Will tolerate temperatures down to 2.C for shot periods but prefers to be in temperatures 15.C to 30.C for the best growth and vigour. Cold Hardiness Zone: 10a

This handsome little palm, distinctive in its entire-bifid leaf and silky hairy inflorescence, is known only from low crown forest near the summit of the isolated peak of Mount Vatovavy, southwest of Mananjary. The forest on Vatovavy is home for several curious palms, such as Dypsis basilonga, D. trapezoidea and D. angusta. The lower parts of the hill have been largely cleared for shifting cultivation and parts of the exposed northeastern face have at some time been partially destroyed by fire. Nevertheless much of the summit area is covered with fine forest that receives some degree of protection under local beliefs or fady. The species name is Greek for woolly spikes, referring to the hairy inflorescences. (J. Dransfield and H. Beentje. 1995)/Palmweb.

Critically endangered due to habitat loss, and plant and seed collecting. It is estimated there are less than 50 individuals left in the wild. It is however, well established in cultivation. (J. Dransfield and H. Beentje. 1995)/Palmweb.

A solitary dwarf Dypsis from moist forest in central eastern Madagascar that sports a thin cane, a scaly, red brown crownshaft topped by a small crown of entire, bifid leaves. The inflorescence is covered in fine, silky hairs. A pretty palm for the understorey in the tropical and warm subtropical garden. (RPS.com)

With entire leaves and thin trunk this Dypsis looks best planted in a group, quite easy to grow in the subtropics and would do well as a pot plant further south. This species is best suited to the tropics but will grow in a well protected area in the subtropics in a frost-free area; it’s a small solitary species only growing to just over 1.5m tall and has a new pinkish emergent leaf, the stem is green like bamboo and very attractive, this species would look good group planted, growing this species in the subtropics is not easy and I would only recommend this species for the collectors or those with experience growing tropical plants. (Utopia Palms & Cycads)