Copernicia rigida is endemic to eastern, and west-central Cuba, The typical gray form, 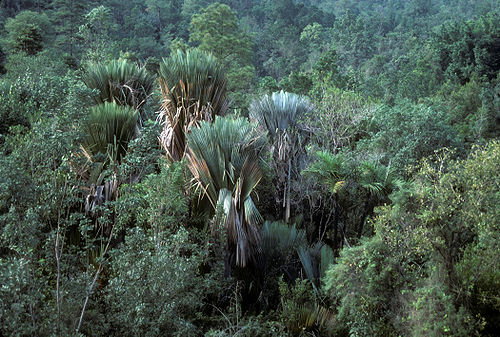 Copernicia rigida & Bactris cubensis near Moa, Cuba. Feb 2000. Note color variation in the leaves of these individuals of Copernicia. The Bactris is the palm to the right of the Copernicia. These palms grow on ultramaphic soil. Photo by Dr. Scott Zona.
is from the savannas of Western/Central Cuba, but the "eastern form" grows in the metal-rich region of Moa which is the oldest part of Cuba. Moa is an "island" of extreme serpentine-derived red soils which hosts an exceedingly endemic and conserved flora. Moa-Maguana is very rainy (>2000 mm on the coast and more inland) but the unusual composition of soils cause "edaphic drought". The ones from Eastern Cuba, have minor differences and a slightly different hue, with remarkable blue wax and orange strikes. (Carlo Morici)

C. rigida is a Cuban endemic that has a disjunct distribution. The typical gray form is from the savannasof Western/Central Cuba, but faraway populations occur in Eastern Cuba, in the mining areas of toxic metal soils between Moa and Baracoa. (Carlo Morici)

An extremely distinctive and unusual, medium sized Copernicia, which has steep, wedge-shaped, circular leaves with sharp spikes that funnel into its center, giving it a very noticeable "shuttlecock" appearance, or a dense crown of stiffly erect, wedge-shaped leaves that stands out as an upward burst of green, and grey, from the surrounding vegetation. Old leaves persist on the trunk for a while, and form a brown skirt below the crown. Editing by edric.

The jata palm prefers full sun and is not particular as to soil but does prefer a well-drained situation. The seeds germinate readily in less than three months. Unbelievably slow growing. The Jata Palm is best suited for the dry tropics.

Some botanists are raising the possibility that C. rigida is carnivorous. Its leaves form a very effective trap for small animals, which die and rot there, providing nutrients for the plant. This possibly evolved after the last ice-age, when C. rigida's habitat was a desert.

A truly stunning and unusual, medium sized palm from savannas in Cuba that sports a straight, gray trunk with a dense crown of stiffly erect, wedge-shaped leaves that stands out as an upward burst of green and grey from the surrounding vegetation. Old leaves persist on the trunk for a while and form a brown skirt below the crown. The Jata Palm is best suited for the dry tropics. (RPS.com).

Special thanks to Carlo Morici, (see external link), for his work on C. rigida.