Coccothrinax moaensis is native to Cuba, where it occurs only in the region of Moa in S.E. 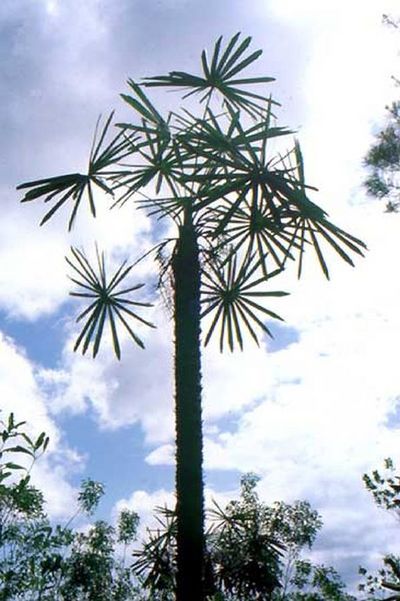 Quemado del Negro, Cuba, Photo by Carlo Morici.
Cuba. "The land of Moa" as it is called by some naturalists, is a very peculiar area from a botanical point of view. Its soils are derived from very old serpentine rocks, and they are "extreme" in that they are naturally loaded with lots of metals and unusual elements. This palm is mainly found at lower elevations and even not too far from the coastline. Its distribution extends south to Maguana (Prov. of Guantánamo) and also inland, while the species clearly follows the patches of serpentine soils. The area is rainy (1.500-2.200 mm/year) and hot (27-28° C as average annual temperature). According to the different localities, Coccothrinax moaensis can be found growing together with other endemic palms, such as Bactris cubensis, Thrinax rivularis, Copernicia rigida and others. (Carlo Morici)

This small palm was described in 1971 by the Hungarian and Cuban botanists A. Borhidi and O. Muñiz, and it was one of the first of many species described by these men in Eastern Cuba. It was originally considered a subspecies of Coccothrinax yuraguana but later, in 1981 Muñiz, decided to give it specific rank and called it C. moaensis. Trunk type: Solitary, Coccothrinax moaensis is a medium sized Coccothrinax, and one of the slowest growing Coccothrinax, spineless in all its parts.

The especially thick leaves are orbicular and the palman (the undivided part of a palmate leaf between the petiole and segments of the blade, of particular pertinence to leaves of fan palms) is characteristic in being small, so the deeply divided segments form an eye-catching pinwheel. The fibre sheaths are often swollen in the middle, giving the trunk a pleasant "bumpy" appearance. Inflorescences and infructescences are short, curved, and they eventually hang with fleshy purple fruits. {Carlo Morici) Editing by edric.