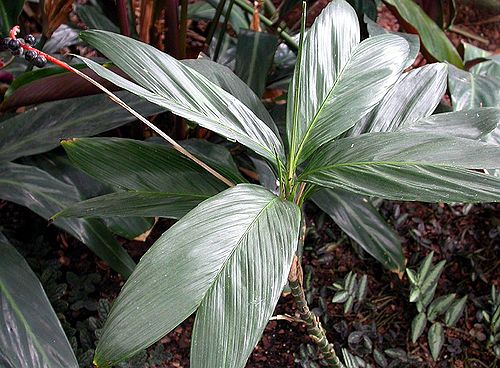 Native to much of southern Mexico and Central America. There are also disjunct populations on the Osa Peninsula (Pacific versant) of Costa Rica and, apparently, another in central Panam. Originally described from cultivated material in Europe, purportedly of Guatemalan origin, these palms are now known to be widespread in wet forests throughout the region. Low to mid elevation rain forests, and Honduras.

Habit: solitary, erect or occasionally decumbent, to 1.5 m tall, often flowering when stemless. Stem: 0.5-1 cm in diam., green, smooth, ringed, internodes 1-3 cm long, adventitious roots conspicuous at base. Leaves: 5-10 per crown, erect-spreading, bifid, rich green above, green below; sheath 8-10 cm long, tubular, green, obliquely open above middle, longitudinally striate-nerved; petiole 2-15 cm long, flat and green above, rounded and pale below; rachis 11-22 cm long, angled and yellow-green above, rounded and yellowish below; blade 15-30 x 15 cm, incised apically 1/3-1/2 its length and there 10 cm wide, oblanceolate or oblong-elliptic, lobes acute, only shallowly and obscurely toothed toward apex, 9-12 nerves on each side of rachis, these obscure above, pale yellowish and prominent below, not keeled above, 2 secondaries between each pair of primaries, tertiaries numerous, faint. Inflorescences: interfoliar but often infrafoliar in fruit, solitary, erect-spreading; peduncles 10-20 cm long, slender, 2-5 mm wide at base, 2-3 mm wide at apex, erect, green in flower where exposed, red-orange in fruit; bracts 5, tubular, closely sheathing, papery', drying brown by anthesis, longitudinally striate-nerved, uppermost shorter than to exceeding peduncle; rachises 2 cm long, green in flower, red-orange in fruit. Staminate with 3-6 rachillae, rarely spicate or with 2 rachillae and then usually only when flowering for one of first times, to 20 cm long, pendulous, slender, pale yellow. Pistillate with 2-3 rachillae, rarely spicate and then usually only when flowering for one of first times, 5-15 cm long, erect-spreading, light or yellowish green in flower becoming thickened and orange-red in fruit. Flowers: Staminate in rather dense spirals, 4 x 3.5-4 mm, globose-ovoid, yellowish, slightly sunken in elliptic depressions 3 mm long; calyx 0.5 x 3 mm, ring like,

Etymology: A Latin derivative meaning having a similar shape, form, or habit to palms in the genus Geonoma.

There has been quite a bit of debate over the years, regarding the taxonomic status of the populations at the northern and southern extremes of its range, which will appear in most popular works on palms as C. tenella . It is my understanding that both Michael Grayum and Donald Hodel now appear to agree that this name is invalid, and that the morphological characters that "supposedly" separate the two are not constant throughout the species range. I fully agree with this conclusion. The traditional view is that those plants with spicate female inflorescences, short apical notches on their leaves and "glossier" leaf laminas are C. tenella , with plants in the central portion of the species range (Guatemala and Honduras) being considered textbook C. geonomiformis . It is also my understanding that plants in cultivation in the U.S. and Australia are largely of Belizean and Mexican origin.