Ceroxylon quindiuense is found in Colombia, and Peru. Disjunct, with populations in the 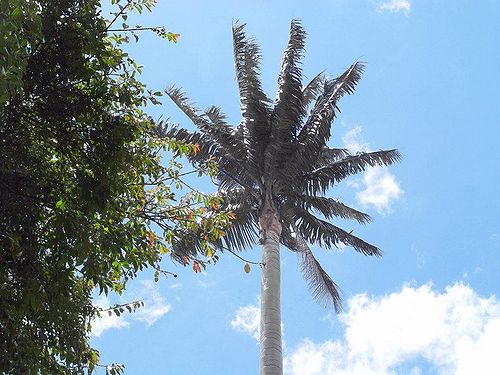 Bogota, Colombia, at 8,612 ft (2625 meters), Photo by Jeff Anderson.
Andes of Colombia, along the central and eastern Cordillera (near the border with Venezuela), scarcely on the western Cordillera, and elsewhere forming populations in the Andes of northern Peru. It grows in humid montane forest, usually at 2000-3000 m, rarely up to 3150 m. It usually forms large and dense populations, many of which remain on pastures and forest remnants, especially on very steep slopes. (Maria Jose Sanin and Gloria Galeano. 2011)/Palmweb.

Etymology: The etymological root of the binomial name Ceroxylon is derived from the Latin Cero meaning ‘coat with wax’ and xulon meaning ‘timber’. Quindiuense is derive from the region from where this palm is indigenous, Quindio, Colombia.

Ceroxylon quindiuense, commonly known as Quindio Wax Palm, Andean Wax Palm or Palma de cera del quindio, is native to mountainous regions of Colombia. This palm is the national tree of Colombia. It is the tallest recorded palm and monocot in the world (200 Ft. tall). The wax on the trunk of this palm was used to produce soap and candles. As a consequence this palm is classified as Vulnerable

Conservation: Ceroxylon quindiuense is known to have been a very abundant species in Colombia until the beginning of the last century, and even if some large populations persist in the Central Cordillera, it has been classified as Endangered (EN; Galeano & Bernal 2005). Most of the forests where this species grows have been turned into pastures, and while hundreds of adult palms are still left standing, the young seedlings do not grow. Besides that, the cutting of young leaves for Palm Sunday during many years, caused the death of many individuals, and a delay in normal growth of the palms. Additionally, in the last decade a new and unknown disease has been causing the death of many adult palms (Cardozo & Guzmán 1993). In Peru, although a formal evaluation has not been made, it is believed that the situation does not differ substantially from the Colombian one (Galeano et al. 2008). (Maria Jose Sanin and Gloria Galeano. 2011)/Palmweb.