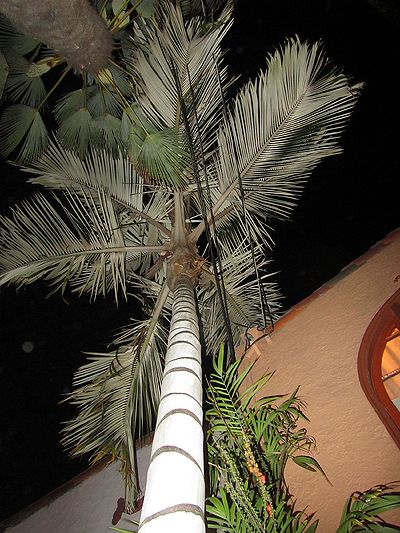 "Darold has great drainage with his deep sandy soil and is situated in the Sunset area of San Francisco where foggy and overcast conditions persist for weeks in Summer with temperatures in nmidsummer sometimes not exceeding 60 F ( 16 c )." (Troy Donovan). Photo by Troy Donovan.
In the Andes. Widely distributed throughout the Andes from Venezuela (Mérida, Táchira) and Colombia to Ecuador, Peru and Bolivia, in wet montane forest, at 2100-3150 (-3500) m, usually found above 2600 m. Sometimes it forms populations of several individuals. Among the species of Ceroxylon and all palms it grows at the highest elevations in the world, up to 3500 m in Ecuador. (Maria Jose Sanin and Gloria Galeano. 2011)/Palmweb.

"My plant of C. parvifrons was never in a pot after germination. After the eophyll was fully expanded I ground planted the seedling beneath a Chamaedorea microspadix in March of 1991. The establishment phase was quite slow, with no above ground trunk for the first 12 years. In the past 6 years it has grown 3.72 m (12' 2") of true trunk with a diameter of 17 cm (6.75"). It holds 9-11 good leaves, has flowered twice, and is a male plant. Note that the trunk below the leafbases is more green. The characteristic white wax is a response to sunlight and develops after exposure. My plant is also more white on the sunny side relative to the shady side! (Darold Petty), "Darold has great drainage with his deep sandy soil and is situated in the Sunset area of San Francisco where foggy and overcast conditions persist for weeks in Summer with temperatures in nmidsummer sometimes not exceeding 60 F ( 16 c )." (Troy Donovan)

Conservation: In Venezuela, C. parvifrons has been categorized as Endangered according to the IUCN criteria, mainly due to habitat destruction caused by deforestation practices for agricutural purposes (Llamosas et al. 2003). In Colombia it was categorized as Nearly Threatened (NT; Galeano & Bernal 2005) because, although it is a species that is widely distributed along the country - therefore not fitting into a threat category, deforestation processes in the Andes are so vast that populations are expected to have been severely diminished. It is strongly emphasized that complete, and updated information on the conservation status of this species is necessary. (Maria Jose Sanin and Gloria Galeano. 2011)/Palmweb.

Uses: The young leaves are traditionally cut to be used on Palm Sunday during Easter. In Ecuador, the wax from the stem was used for making candles.