Burretiokentia vieillardii is found in the rainforests, of New Caledonia. This species is widespread throughout the mainland. 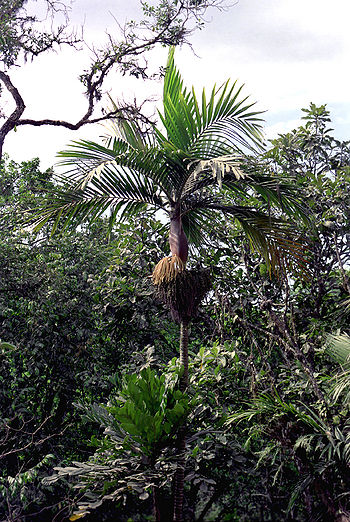 Col d' Amieu, New Caledonia. Photo by Bryan
Habitat: In rain forest on slopes or in gallery forest. Substrate: On ground more or less deep on ultramafic and sedimentary substrate (shale), schistose or ultramafic rocks. It occurs from one end of the island to the other, seemingly wherever one enters the forest, and often forms large, gregarious populations. 400-1300 m. elevation. (From the French)

Requirements: Full sun, when mature, consistently moist soil. Special note: Pin stripes are difficult, to maintain in cultivation. Year round fruiting, while others are seasonal...Rare in cultivation. This palm has proved rather difficult to grow in South Queensland, and this I think is because of lack of attention to its requirements. As a seedling it requires quite heavy shade and ample amounts of water and humidity. It also wants a rather alkaline soil.