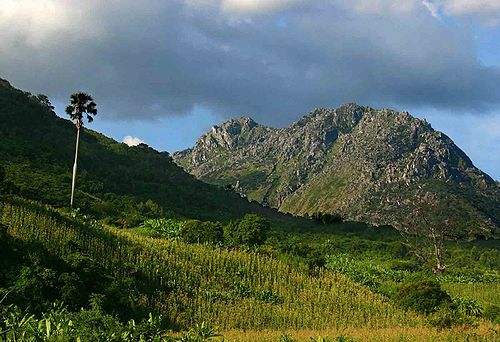 Rusitu Valley Habitat: At edge of cultivated field. Photo by Dr. Bart Wursten
Tanzania, Togo, Uganda, Zaire, Zambia, and Zimbabwe. Found across sub-Saharan Africa as far south as northern South Africa. Absent from parts of southwest and central Africa, and the Horn of Africa. Present on a number of offshore islands including São Tomé and Bioko in the Gulf of Guinea, three of the Cape Verde Islands, and Pemba, Zanzibar and Mayotte in the Mozambique Channel. Present in the Sambirano region of northwest Madagascar, including the islands of Nosy Bé and Nosy Mitsiou, though it may be introduced there. (R.P. Bayton. 2007/Palmweb.

Riverine forest and savanna in low-lying areas, particularly on sandy or alluvial soils. Borassus aethiopum can form dense almost monospecific forest stands or is a component of more diverse riverine forest. However, it is as the main component of palm savannas for which it is best known. Borassus aethiopum is well adapted to fire and herbivory and prospers in areas with frequent burning and browsing. After the pyrenes are dispersed, the embryo is buried underground by the extending cotyledonary petiole (Barot & Gignoux 1999). The meristem is thus protected in the early years of life during a period known as the establishment phase. After several years surviving as a small cluster of leaves, the palm finally generates a stem and this grows rapidly. At this stage, the meristem is vulnerable to fire and herbivory, but is protected to some extent by the skirt of dead leaves that clothes the stem. The dead leaf blades are highly-flammable, but the woody petioles are more persistent and this may allow brush fires to pass quickly; the leaf blade is quickly consumed, but the petiole burns slowly, keeping the fire away from the meristem. As a result, the stem is covered with petioles, which may also serve as a deterrent to large herbivores as the petioles are armed with spines. The accumulated leaf sheathes and petioles are shed cleanly at maturity (Barot & Gignoux 1999). At this point, the meristem is protected from fire and herbivory by virtue of its height above the ground. (R.P. Bayton. 2007)/Palmweb.

They grow swelling, solitary trunks to 25 metres (82 ft.) high, and 1 metre (3 ft. 3 in.) in diameter at the base. The green leaves — 3 to 4 metres (10-12 ft.) wide — are carried on petioles — 2 metres (6 ft. 7 in.) long — which are armed with spines. The crownshaft is spherical to 7 metres (23 ft.) wide, the leaves are round with stiff leaflets, segmented a third or half-way to the petiole. In male plants the flower is small and inconspicuous; females grow larger, 2 centimetres (0.79 in.) flowers which produce yellow to brown fruit resembling the coconut containing up to 3 seeds. Editing by edric.

Borassus aethiopium is a dioecious palm species native to Africa where it grows in savannas and woods. The name is Latinized for 'Ethiopian' where the species is known; it is commonly called palmyra palm, as are all the plants in the genus.

Etymology: ‘Aethiopia’ was a general term used by the ancient Greeks and Romans for Africa south of Libya and Egypt. (R.P. Bayton. 2007).

In English it is variously referred to as African fan palm, African palmyra palm, deleb palm, ron palm, toddy palm, black rhun palm, ronier palm (from the French) and other names. It also has names in African languages. The tree has many uses: the fruit are edible, as are the tender roots produced by the young plant;[1] fibres can be obtained from the leaves; and the wood (which is reputed to be termite-proof) can be used in construction. There are at least two varieties of this species: var. bagamojensis and var. senegalensis.

Conservation: Least concern. Borassus aethiopum is widespread and common in a number of African countries. While several populations are in decline (Sambou et al. 1992; 2002), the palm remains common. Borassus sambiranensis is listed by the IUCN as endangered (EN A1c) due to habitat loss/degradation and suppression of regeneration by fire. It is perhaps unfortunate that by placing this taxon in synonymy with the widespread B. aethiopum, the conservation status of the Madagascar populations will be masked. (R.P. Bayton. 2007)/Palmweb.

Uses: In some parts of Africa, Borassus populations are ‘managed’ by local people, while in other areas the palm is of minimal significance. In many areas, Borassus aethiopum is restricted to game reserves and national parks where it is outside the reach of local people. The leaves are used for thatch and weaving, though species of Hyphaene are generally preferred. The palm is tapped for wine, though the process is different from that used in Asia as the apical bud is tapped rather than the inflorescences. The fruits, undeveloped endosperm and cotyledonary stalks are consumed. Burkill (1997) has reviewed the uses of Borassus aethiopum in West Africa. (R.P. Bayton. 2007)/Palmweb.