Bactris militaris is found in Costa Rica, and Panamá. 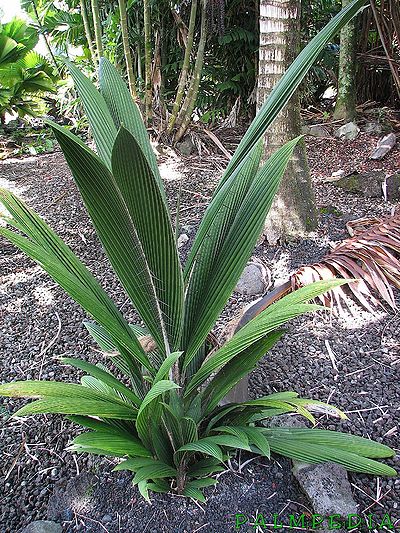 This is a very attractive, medium sized palm with long, narrow, simple, upright, dark grey/green leathery leaves. Armed with spines. Extremely rare, and thought to be extinct until recently rediscovered.

Bactris militaris is diagnosed by its simple, elongate cuneate-oblanceolate leaf blade gradually expanded from the narrowly cuneate base to the bifid apex, orange fruits, and pitted endocarps. The above description is mostly taken from Moore (1951) because there are few new collections since then. In fact, this species appears to be rare in the wild (Hodel &Binder, 1996). De Nevers et al. (1996) included specimens from the Atlantic coast of Costa Rica under B. militaris. These are here recognized as B. neomilitaris, following de Nevers & Henderson (1999). The two species can be separated by their endocarps. Those of B. militaris, from the Pacific coast, have pitted endocarp swith few endocarp fibers without juice sacs attached; those of B. neomilitaris, from the Atlantic coast, have smooth endocarps with terete fibers that have juice sacs attached. Bactris militaris is a member of a group of similar species confined to Central America and the Pacific coast of Colombia and Ecuador characterized by their obovoid, orange or red fruits. (Henderson, A.J. 2000)/Palmweb.

Costa Rica has a remarkably diverse palm flora and an excellent network of protected areas so there is every hope that much of the wonderful variety will persist. One of the rarest palms of Costa Rica is the extraordinary Bactris militaris. Described some 50 years ago, this splendid palm with its narrow undivided leaves has been scarcely known in cultivation. It's not surprising that such a spectacular palm should be high on every collector's desiderata list. Don Hodel and Mark Binder describe in graphic detail a sodden trip to Costa Rica during which they eventually found Bactris militaris.