Wettinia hirsuta is found in Colombian and Panamanian lowland and montane 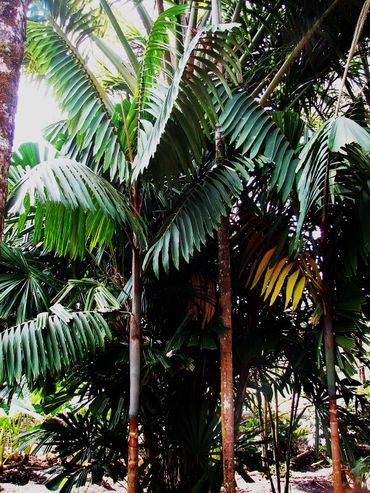 Wettinia hirsuta is a single-stemmed, evergreen palm growing 4 - 12 metres tall. The un-branched stem can be 8 - 11 cm in diameter; it has stilt roots about 35 cm long; and is topped by a crown of 5 - 7 leaves. Editing by edric.

"I can't think of a stilt-rooted palm that will survive the subtropics, except for a few Areca spp. Make sure the roots and leaves are moist as well as the soil. Think of the air around the roots as soil that needs to be constantly filled with water vapor." (Christian Faulkner)

Conservation: Endangered; much of the forest is fragmented in the middle Magdalena Valley because of encroaching agriculture and the species has become scarce here.

A spectacular, slender, solitary Wettinia from montane rainforests in northwestern Colombia between 400 and 1300 m (1300 and 4300 ft.) with a long, light grayish green crownshaft and a dense crown of spreading leaves with weeping, broad, dark green leaflets. The multiple, short inflorescences are crowded below the crownshaft and, before the bracts open, resemble ears of corn. It is threatened in its native habitat by deforestation and also rarely seen in cultivation, where it is best suited to humid, tropical and some warm temperate climates. (RPS.com)

"The coloration of the crownshaft is similar to the Socratea, a nice blue green that feels like felt. The pinnae in this species does not split and get more pendulous as the palm ages." (Timothy Brian)

"Very ornamental solitary, pinnate crownshafted palm from the mountains of South American jungles. It has droopy, somewhat elongated-fishtail-like leaflets and a slate blue-grey crownshaft above a nice orangy-brown, ringed trunk... very ornamental! Grows in south Florida well, but no idea about California.. .suspect it's too tropical for us here." (Geoff Stein)