Malaya. The palm flora of Peninsular Malaysia is relatively well worked out. Last 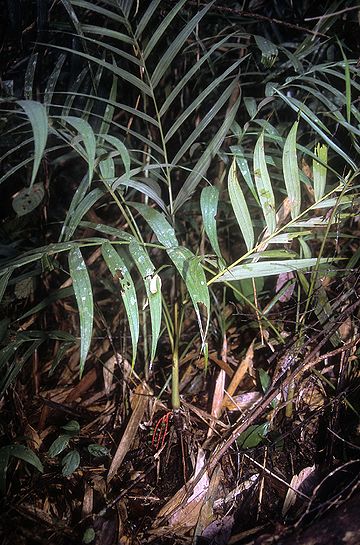 Pinanga sarmentosa, Sungai Nipah, Terengganu, Malaysia. Oct. 2002. This species was described new to science based on this small hillside population that Scott Zona and his colleagues discovered. Photo by Dr. Scott Zona
year it came as a pleasant surprise when a collection team from the Kepong herbarium with visitors from the Fairchild Tropical Garden (Scott Zona and Carl E. Lewis) chanced upon this very unusual and elegant Pinanga from the Sungai Nipah Forest Reserve, Terengganu. In Peninsular Malaysia, only two other species of Pinanga form stolons or have long-necked rhizomes – P. riparia Ridley and P. johorensis C.K.

Lim & L.G. Saw (Lim 2001). Both of these species have stolons or rhizomes just beneath the soil or, if exposed, very close to the soil. These are also large plants, often exceeding 2 meters in height.