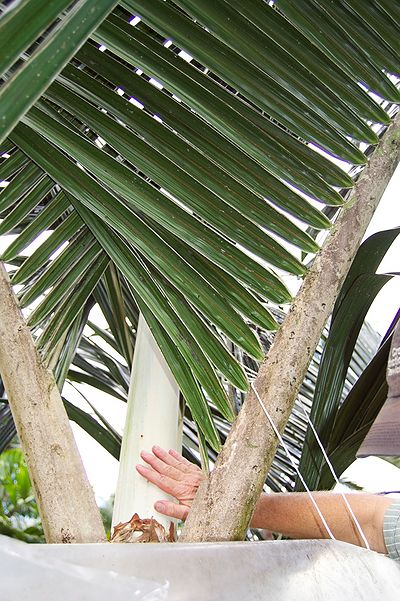 This most attractive palm with bright, almost fluorescent, ivory white new spear and petiole is almost impossible to misidentify as a juvenile. No other species is similar enough at this stage to cause confusion. Photos of a mature adult have yet to be knowingly identified.

A small amount of seeds of this magnificent and apparently undescribed palm from Madagascar had first been brought into cultivation in the mid 1990's as D. tsarantananensis. Its origin had been lost subsequently, leading some to think it may even have gone extinct, the palm has now been found again in rainforests in the mountains of eastern central Madagascar. It has a few features that are reminiscent of D. bejofo and seems to be related to that species. In cultivation it is now mostly referred to as Dypsis sp. 'white petiole'. While it appears to be rather slow growing, at least in its early stages, it develops into a breathtakingly beautiful ornamental palm with white leaf stalks (petioles) and white leaf bases that fade into orange brown towards the base. The leafstalks and bases have a curious, soft, felt-like surface. The leaves are strongly keeled and beautifully recurving towards the tip and hold numerous, evenly arranged, stiff, deep dark green leaflets that contrast stunningly with the white petioles. The compact and much-branched flowering stalk is produced from among the leaves and at first protected by a pure white bract. It appears to be an excellent palm for the tropics but may also do well in frost free warm temperate climates. (from rarepalmseeds.com)

This is a tillering palm, it exhibits saxophone style root growth (it has a heel), keep top third of heel above soil elevation! Editing by edric.