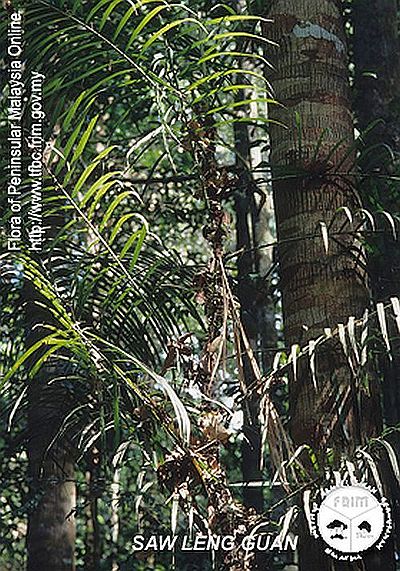 Malaysia. Photo: Malaysian Biological Diversity.
Pahang, Perak, Selangor, Negri Sembilan, Malacca, Johore. Thailand. Sumatra. "Rotan sabong" is one of the commonest Malayan rattans, though absent from the N.W. of the Peninsula. It is found in a wide range of habitats from the margins of swamps in the lowlands to ridgetops at 1000 m or more altitude in the highlands, being found both on hillslopes and in valley bottoms. (J. Dransfield. 1979)/Palmweb.

Furtado separated the populations from Kelantan and Trengganu as a separate species, D. stipitata on the distinguishing characters: fruit shortly pedicellate, large thorns on sheath blackish and with 3-5 rows of bristles on the leaf underside. However, I have found a whole range of intermediates between the two extremes and feel I cannot justify retaining two species. The variety stramineus was separated from D. verticillaris by Furtado based on the presence of dirty straw coloured rather than reddish fruit scales - here again, such a range of colours is found that the variety is not regarded here as being sufficiently distinct. (J. Dransfield. 1979)/Palmweb.

Uses: Rarely used as a source of a rather poor quality cane. (J. Dransfield. 1979)/Palmweb.