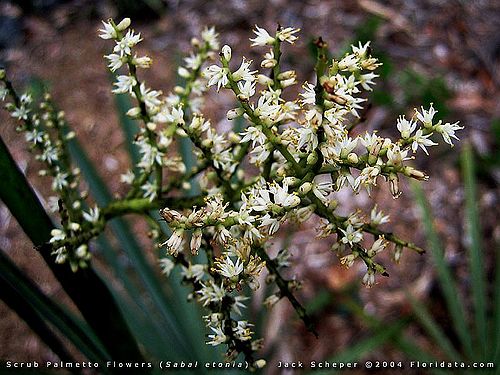 of Florida, in dry sandy soils that have a supply of water at depth, as part of the understorey in sand pine and oak scrub communities. Scrub palmetto occurs naturally only on well-drained sandy ridges in peninsular Florida. It is usually associated with saw palmetto, scrubby oaks (>Quercus spp.) and Florida rosemary (Ceratiola ericoides). Scrub palmetto is a characteristic plant of the Florida scrub, an endangered plant community that is restricted to Florida.

Scrub palmetto is a small shrub-like palm whose trunk usually remains underground. The fan-shaped leaves are about 3 ft (0.9 m) across and costapalmate, which means that they are essentially palmate (fan shaped), except that the petiole (leaf stem) extends part way through the center of the leaf fan as a midrib. Scrub palmetto will grow up to 3-4 ft (0.9-1.2 m) tall with a spread of 4-5 ft (1.2-1.5 m). Under garden conditions scrub palm is a more robust grower reaching to 6 ft (1.8 m) in height. The small white flowers are fragrant and held in great numbers on a long stalk that does not extend beyond the leaves. These are followed by 0.6 inch (1.5 cm) fleshy fruits that turn black when ripe. (floradata.com) Editing by edric.

Solitary, subterranean, rarely growing upright to 2 m tall. Leaves: Strongly costapalmate, induplicate (recurving), blade curved by costa, yellow green segments stiff and split almost to the base of the blade with fibers between segments, tips bifid; petiole unarmed. Flowers and fruits: Inflorescence densely branched to two orders, shorter than or about as long as the leaves. When ripe, fruits are spherical to ovoid, brown or black drupes, 9-13 mm long.

The scrub palmetto, along with the dwarf palmetto, has a subterranean stem that is frequently S-shaped or contorted; the crown bud is held below the soil surface. The height of this palm varies from 3 to 4 feet, and there are generally 5 to 8 living palm leaves present at any given time. The leaf blades are simple with deep, palmate lobes and bifurcate (Y-shaped split) tips. The inflorescence is half as long or as long as the leaves and bears small, white flowers in the spring. The flowers are followed by small, shiny black berries, that are 0.9–1.5 centimetres (0.4–0.6 in) and 0.8–1.3 centimetres (0.3–0.5 in) in diameter.. (edis.edu)

Wildlife and Ecology: Provides significant food and cover for wildlife. Larval host for monk skiller (Asbolis capucinus) butterflies. Nectar plant for butterflies. Birds and other animals eat the fruits. Scrub palmetto resembles saw palmetto (Serenoa repens), but the latter has a true palmate leaf with no midrib. Another trait that distinguishes saw palmetto from scrub palm are the small sawlike teeth along the edges of the petiole which inspire its common name.

Often cofused with Sabal minor, but its leaves are gray-green and not recurving, without marginal fibers, and its inflorescence exceeds the leaves in length. In addition, Sabal etonia is a scrub plant while Sabal minor is found in swamps and marsh areas. (The Institute for Regional Conservation. Delray Beach, Florida.)

A low growing Sabal, often with a subterranean, or, at best, shortly erect trunk. It is frequently seen on waste ground and vacant lots, though there are significant populations in various national parks, in central and southern Florida. Its small, bushy appearance and its tough and hardy character makes it a very suitable choice for the smaller temperate garden. (RPS.com)