Christoffelpark, Curaçao Island. On Bonaire, the plants are found in the Coccoloba–Melocactus Middle Terrace 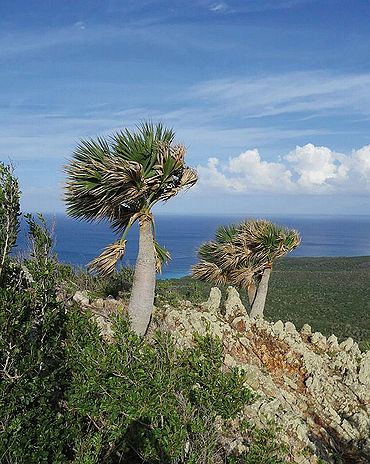 Sabal antillensis, Christoffelpark, Curaçao, showing pachycaul trunk habit, and most leaves held at an angle ascending from the trunk axis (photograph: Griffith).
landscape type (de Freitas et al. 2005), on limestone pavements, at elevations near 5 m. On Curaçao, the plants are found in the Bromelia–Schomburgkia Hills landscape type (Beers et al. 1997), on cherty mudstones, at elevations between 140–260 m. This species occurs on the islands of Bonaire and Curaçao. On Bonaire, the plants are found in the southern part of the island, west of Lac Bay and north of the solar salt factory. On Curaçao, the plants are within and to the west of Christoffelpark, on the western side of Christoffelberg.

Habit a solitary, single-trunked palm, overall height to 4.5 (rarely 6) m, with a compact crown of leaves, mostly ascending from the trunk axis, and inflorescences sometimes exserted beyond the leaves. Trunk to 4 m high, up to 45 cm diameter at widest point, often distinctly tapering upwards, with up to 40 leaves. Leaf 100 to 200 cm long overall, strongly costapalmate, grass-green, the undivided portion of the blade strongly sinuous with more than one arch when viewed from the side, filiferous between the leaflets. Petiole half or less of the total leaf length, less than 1 m, often 35–75 cm long, up to 6 (7) cm wide, 2 cm thick, the proximal portion split to nearly 30% of its length, with papyraceous ligules to 20 cm long and 4 cm wide, persistent on newest half of leaves and only rarely seen on older ranks of leaves. Adaxial hastula acute, 10 to 16 cm long. Abaxial costa linear, 30–55 cm long. Leaf segments Up to 80 (90), strongly induplicate at insertion to hastula and proximally undivided for (12%) 20–25% of their length, with the apex divided for up to 50% of the leaflet length. Basal leaf segment 40–65 cm long from hastula to tip, to 1.8 cm wide. Leaf segment 45° from middle leaf segment to 90 cm long, 5 cm wide. Middle leaf segment to 65 cm long, 1.8 cm wide. Inflorescence arcuate, held within the crown of leaves and not pendant below it, sometimes exserted beyond the leaf tips, branched to three orders, to 160 cm length, peduncle to 2.5 cm wide and 1.5 cm thick proximally and up to 40 cm long with several sheathing bracts, rachis up to 120 cm long, with up to 12 branchlets (= partial inflorescences), each branchlet with a lepidote rachis bract and 7–12 rachillae each, and 3–4 flowers per cm of rachillae. Flowers sessile, minute, 3.5–5 mm long, calyx green, glabrous, tubular to cupulate, 2.3–3 mm long, 2–2.5 mm wide, petals glabrous, white, obovate, 1.2–1.4 mm long, anthers 1–1.2 mm long, cream white to pale yellow, style 1.4–1.6 mm long, 0.5 mm wide. Fruit glabrous, black, spherical, 11–14 mm high, 13–15 mm wide. Seed oblate-spherical to slightly pyriform, brown to black, glabrous, 6–9 mm high, 8–13 mm wide. (Dr. M. PATRICK GRIFFITH 1, Dr. JOHN DE FREITAS 2, Dr. MICHELLE BARROS 1 & Dr. LARRY R. NOBLICK 1)

Etymology:—The name honors the Dutch Antilles, where the species is endemic.

Conservation Status:—Using the IUCN (2001) Red List criteria, S. antillensis should be considered Vulnerable (D 1, 2), based on a small total number of mature individuals (see below), and a small total area of occupancy about: 3.1 km2 ). The detailed and thorough demographic survey by Winkelman (1979) noted 323 reproductively mature individuals, and abundant younger palms and seedlings, but also noted the damage that feral goats cause on the seedlings. During fieldwork in 2017, 196 mature individuals were observed, but this count was not intended to be a complete demographic survey. In 2017 we also observed abundant seed production and very successful seedling recruitment on both islands, and no dead palms. The vast majority of Sabal antillensis occurs within Christoffelpark, a National Park where introduced herbivores are managed and excluded. There is greater concern for the population on Bonaire, which is now smaller in area and much less numerous than in past records (Winkelman 1979; de Freitas et al. 2005). The Echo Foundation (Bonaire) has a successful cultivation program with seed grown S. antillensis, which provides an important ex situ germplasm reserve if needed. No extractive use of this species is currently known. (Dr. M. PATRICK GRIFFITH 1, Dr. JOHN DE FREITAS 2, Dr. MICHELLE BARROS 1 & Dr. LARRY R. NOBLICK 1)

The indigenous palms of Curaçao have most recently been referred to as Sabal cf. causiarum (van Proosdij 2012). The presence of somewhat persistent ligules, and similar inflorescence architecture suggest some similarity for S. antillensis and S. causiarum, but similar, smaller ligules are also found in S. maritima Burret (1933:101). There are many morphological differences, as presented above in the diagnosis. One immediately observable difference is in the density of the crown of leaves, resulting from the relatively shorter petioles of S. antillensis, giving a much less transparent silhouette than S. causiarum (Figures 3, 4). Mature Sabal antillensis infructescences are held within the leaves and do not hang pendant below the leaves as is often seen in S. causiarum (Figure 3). The Sabal antillensis leaf crown habit may also resemble older, taller individuals of S. palmetto (Walter) Lodd. Ex Schult. & Schult.f. (1830:1487) in habit, which sometimes exhibit leaves held closely to the trunk. Sabal antillensis differs from such veteran S. palmetto by papyraceous ligules on the newest leaves, and from both S. palmetto and S. causiarum by having a much shorter overall height. Seeds of S. antillensis are the largest Sabal seeds known in the Caribbean (Figure 5), similar in size to S. bermudana Bailey (1934:326) and exceeded only by some Mexican species (Zona 1990). Sabal antillensis also shows leaflet anatomical differences with S. causiarum, especially with regard to fiber bundles. (Figure 6). In leaf segment transections, Sabal antillensis exhibits adaxial fiber bundles between nearly every pair of adaxial secondary minor veins, whereas in S. causiarum, these adaxial fiber bundles are much less abundant. Abaxial fiber bundles in S. antillensis show a mostly alternating pattern of large bundles intercalated with small bundles, while S. causiarum shows a pattern of large abaxial fiber bundles, with occasional infrequent smaller bundles. In addition, the hypodermal cells are frequently enlarged in the region of the vein attachments in S. causiarum, whereas they remain the same size in S. antillensis. Primary veins of S. antillensis appear to be closer together, perhaps giving the leaf blade greater structural support, which may be required in its dry, windy habitat. (Dr. M. PATRICK GRIFFITH 1, Dr. JOHN DE FREITAS 2, Dr. MICHELLE BARROS 1 & Dr. LARRY R. NOBLICK 1)

The single native palm species on Curaçao and Bonaire did not receive much attention, or even a determination, for many decades. Of the four Arecaceae in Boldingh’s (1913, 1914) florae, all are cultivated, with Sabal Adans. not among them. Four decades later, Stoffers (1956) mentioned “an unidentified species of the palm genus Sabal” on a limestone terrace in southern Bonaire, and “a not yet identified species of the genus Sabal” confined to the hills of northern Curaçao. Very little was known about these palms until Winkelman’s (1979) MSc thesis, which offered a robust geographic and demographic assessment. Winkelman identified this palm as “Sabal spec.,” and considered it endemic to Curaçao and Bonaire. Winkelman also confirmed that not much was written about it until her study. Wessels Boer (1988), in a treatment of Venezuelan palms, reported Sabal mauritiiformis Griesbach (1864:514) on Curaçao and Bonaire. His own specimen from 1963 (Wessels Boer 1661, NY!), collected at the “windy hills of plantation Knip” on Curaçao, with leaf segments not clustered and including fruits 12–15 mm in diameter, does not easily fit S. mauritiiformis, which has clustered leaf segments and fruits 8–11 mm (Zona 1990). Van Proosdij’s recent (2012) flora tentatively classified these palms as Sabal cf. causiarum. Field and lab study in 2017 revealed that these palms do not fit current concepts for Sabal causiarum Beccari (1907:71) or any other Sabal (Zona, 1990). Thus, we describe the palm here as a new species. (Dr. M. PATRICK GRIFFITH 1, Dr. JOHN DE FREITAS 2, Dr. MICHELLE BARROS 1 & Dr. LARRY R. NOBLICK 1)

Diagnosis:—This new species is most similar to Sabal causiarum in leaf morphology and inflorescence structure, but differs in the pachycaul habit, the petioles less than half the total leaf length giving a distinctive densely foliated crown, the smaller and less persistent ligules, the more divided leaf segments and leaf segment apices, the frequent adaxial fiber bundles between most secondary minor leaf segment veins, the inflorescences not pendant below the leaves, the abaxially lepidote sheathing inflorescence bracts, the lower density of flowers on the rachilla, the tubular to cupulate calyx, the larger fruits and the larger seeds. (Dr. M. PATRICK GRIFFITH 1, Dr. JOHN DE FREITAS 2, Dr. MICHELLE BARROS 1 & Dr. LARRY R. NOBLICK 1)