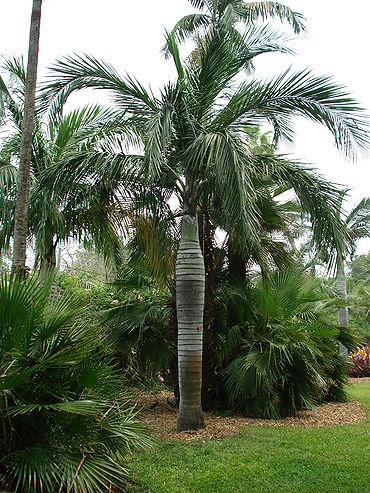 Pseudophoenix vinifera is distinguished from its congeners by its strongly bottle-shaped stem at maturity, its distally directed rachillae and its triangular calyx. In gross appearance, it most closely resembles P. ekmanii, but in aspects of the inflorescence, flower and fruit, it resembles P. lediniana. (S. Zona. 2002)/Palmweb.

"My experience over several years has been that P. vinifera is only slightly less cold hardy than P. sargentii. This winter season, I had a very unusual cold blast for 4 nights in a row (26 F,25 F,25 F,and 28 F were the minimum temps.) Over a dozen P. sargentii planted around the yard were totally unprotected and received little to no damage. A 10 ft overall P.vinifera in the middle of the yard (unprotected) took 50% freeze burn but has already pushed 1 inch of new spear over the last 3 weeks.A smaller 6 ft overall P.vinifera close to the house only took 10% burn and has also pushed a new inch of spear. I live in a desert with humidity often only 5 - 10% and don't remember seeing frost on any plants,although cars and the roofs of houses will get frost a few times each year. In my opinion,they are pretty darn hardy as other palms around the yard like triangles,foxtails,and cuban royals were completely defoliated!" (Scott (aztropic))

Uses: In the past, this species was much exploited for the sweet sap that was fermented into “wine” (hence the epithet “vinifera”). The palm is still occasionally used for this purpose, but past exploitation has so diminished populations that the practice seems to have diminished as well. Pseudophoenix vinifera makes a striking ornamental palm and is occasionally cultivated by collectors and botanic gardens. (S. Zona. 2002)/Palmweb.

"P.vinifera tends to be a very upright palm, until it develops some trunk. Although similar to P. sargentii in looks, as a mature tree its dimensions tend to be larger overall; including the size of the red cherry-like fruits." (Scott (aztropic)

Two dozen palms remain in grove where there were several hundred when re-discovered forty years ago.