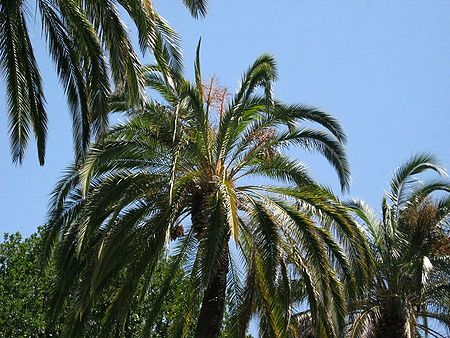 The cliff date palm, growing to only about 20 ft (6.1 m), is smaller than the more commonly planted Canary Island and true date palms. It is a tidier tree with a a neater appearance as the trunk is clean, not retaining the old leaf bases like other date species. As the leaves die they are shed leaving a smooth trunk ringed with narrow scars at the point of attachment. It is the canopy of fronds that really sets this Phoenix palm apart from the rest. The leaves, which grow to about 10 ft (3.1 m) long are bright green color and are arranged in plane on the stem which gives the fronds a flat appearance that combined with their unique, natural curving, arching and twisting form results in a very graceful palm. The purplish red fruit is about 0.75 in (1.9 cm) long and has a thin layer of edible flesh although the fruit is not this palm?s best quality. (floridata.com)

Conservation: The conservation status of P. rupicola in its wild habitat is unclear. It has a limited range, making it vulnerable to habitat loss. The ability of P. rupicola to thrive in inaccessible habitats such as steep, rocky slopes, ridges and cliffs may help ensure its survival in the wild. (S.C. Barrow. 1998)/Palmweb.

Uses: Fruits of P. rupicola are sweet but mealy, and are eaten by mammals and birds. Gamble (1902) noted that the stem pith is eaten uncooked by local Lepcha people. (S.C. Barrow. 1998)/Palmweb.

Usually clean of leaf bases except near the crown. Leaves are 2.5 to 3 m long, 35 cm leaflets, pinnately arranged, on 50 - 60 cm pseudo petioles armed with acanthophylls (spines). The spines are much less numerous and less vicious than the other Phoenix species.

"This is probably one of the most tropical of the Phoenix palms, and the most tropical looking of them. It has soft, droopy leaves with hardly any spines at the leaf bases (though they're still there, so careful). It has the greenest leaves of the Phoenix and is a very graceful tree. I have had some trouble growing this species - it's a bit touchy in zone 9b and it's quite slow too.... but it does grow here very well for some people. In southern California this Phoenix is the most prone to yellowing of all the Phoenix, looking like it's suffering from severe potasium deficiency. Whether or not that is actually the case, I don't know. Sometimes P canariensis will show the same yellowing, but rarely. In fact, the yellowing is so prevelant, that it's sometimes used as an identifying factor when trying to figure out what species certain mature Phoenix are. Even the hybrid P rupicolas tend to have yellowy leaves." (Geoff Stein)