Pinanga javana is endemic to Java, now confined to the mountains of West Java. This species was recorded 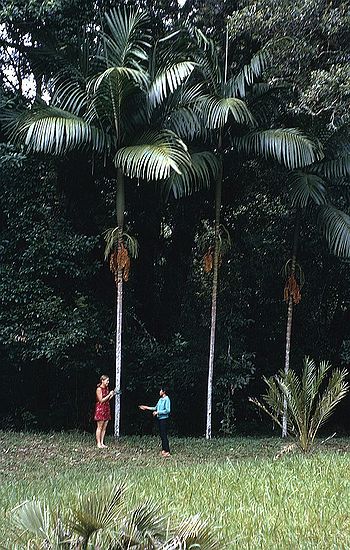 Cibodas, West Java, Indonesia. Photo by Dr. John Dransfield, Royal Botanic Gardens, Kew/Palmweb.
on Mt. Slamet (Central Java) (Whitten et al. 1994) but was not found when we searched for it in 1999. Specimens collected by Backer in 1914 from Mt. Wills and by Kobus from Mt. Tengger indicate that it once grew in East Java; however, during field observation in 1998, no P. javana was found in either locality. It is possible that this species is extinct (extirpated) at these locations. Occurring on very steep hillsides in moist lower montane forest and damp montane forest in deep soil at altitudes of 800-1,700 m above sea level, but not on ridge tops. (J.R. Witono, J.P. Mogea and S. Somadikarta. 2002)/Palmweb.

Dr. Dransfield collected P. iavana in 1973 on Mt. Pulasari, Mandalawangi, West Java, where this species is abundant in summit mossy forest at altitude 800 m asl. In its morphology, P. javana is quite different from P. coronata. It is a robust palm, always solitary, and the arrangement of the rachillae is always alternate and distichous. On the other hand, P. coronata is a small and clustered palm, and the arrangement of its rachillae is always spiral. The distribution of these species is also different. Pinanga javana is very restricted, found only in lower montane forest (800-1,700 m asl) in West and East Java, while P. coronata is more widespread, and is found from Sumatra, Java, to Lesser Sunda Islands, from sea level to montane forest. (J.R. Witono, J.P. Mogea and S. Somadikarta. 2002)/Palmweb.

"Although they are hardier than a lot of Pinangas, they are still pretty tender! They like heat, but will also tolerate more dry than most Pinangas I've tried." (Daryl O'Connor)

"They do grow well, but really can't take freezes or even prolonged or continuous sub- 35f weather. It doesn't mean they're impossible though. My experience is with young ones (seedlings). I would keep them in pots for a couple years anyway, and in filtered light. I've heard they take sun eventually, but I haven't got mine to that point apparently; they hate any direct sun at a young age." (Bret Qua)

"This is (was?) a two year old, in the ground plant about 18" tall. The cold december temps with plenty of near- freezing nights battered it, but it continued to push a nice green spear. 26F seems to have put an end to that." (Bret Qua),

"One of the only solitary Pinangas I have seen growing in California. This one has some remarkable cold tolerance for a Pinanga, and has even set viable seed here in Ventura County, California. It has a long, golden crownshaft, a relatively sparse crown of leaves, and a thin (2") green, ringed trunk. This is a native of the island of Java." (Geoff Stein)

A beautiful palm from the Indonesian island of Java, where it grows in montane rainforests. Quite a large species, it forms a solitary, tall trunk, topped by a silky green crownshaft that holds several gracefully arching, pinnate leaves with wide leaflets. It will adapt to frost-free warm temperate as well as tropical climates. (RPS.com)