Endemic, Hawaii. Now restricted to the tops of the stack-like, rocky islets of 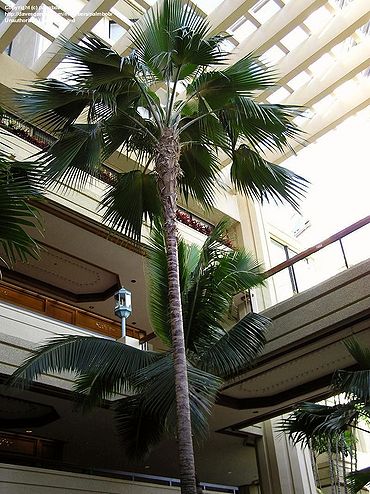 "Exceptional tree in Hawaii protected by some overhead glass (still outdoors)- nearly perfect" Photo by Geoff Stein
Huelo and Mokapa off the north coast of Molokai, 75-100 m elevation. As recently as the 1970s, a few plants of Pritchardia hillebrandii were also on the valley floors and at the base of the immense coastal sea cliffs along the north coast of Molokai although these may have been cultivated because they were near or at sites of human activity. Nonetheless, they are gone today, rats and goats likely having driven them to extinction (S. Perlman and K. Wood, pers. comm.) (iucn.org)

"Pritchardia hillebrandii or Loulu lelo (yellowish loulu), is endemic to the Island of Molokai where it grows along the northeastern coastline at elevations of 100 to 1900 feet. Today, the habitat is limited mainly to the tops of islets Huelo and Mokapa located off the north coast of Molokai." (Bill Chang)

Pritchardia hillebrandii is distinctive in its conspicuously waxy glaucous leaf blades more or less devoid of lepidia, inflorescences shorter than or equaling the petioles, and small fruits. Leaf blades can be so heavily glaucous that they appear nearly white. It is similar to P. maideniana but the latter differs in its diamond-shaped (in outline) leaf blades (the result of strong and conspicuous folding) that mostly lack the giaucous covering. It is unclear whether Hillebrand's type material originated from cultivated plants in Honolulu or from wild or cuitivated plants on Molokai. Beccari (1890) noted that much confusion surrounded the provenance and labels on Hillebrand's specimens at B, although there is a loose note in the photograph at FI of the type at B with the name Molokai handwritten on it. It is also unclear whether the numbers identifying the syntypes of P. insignis (7970 and 8800) were applied by the Botanic Garden in Guyana or its herbarium or by the Berlin Herbarium. (iucn.org)