New Guinea. Licuala telifera is endemic to the island of New Guinea including 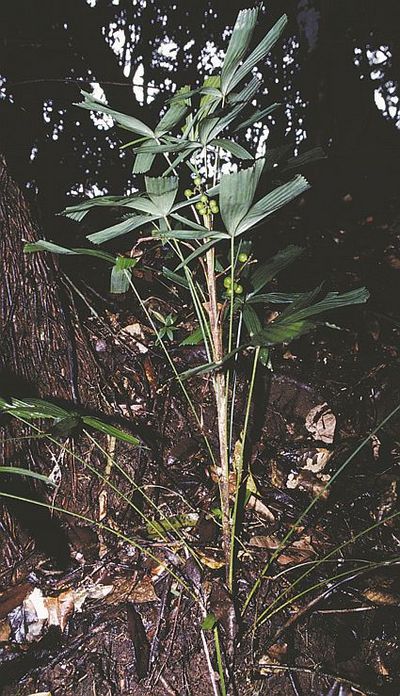 Wandammen Peninsula, Papua, Indonesia. Photo by Dr. William J. Baker, Royal Botanic Gardens, Kew/Palmweb.
the Indonesian provinces of Papua and Papua Barat, as well as the eastern half of the island, Papua New Guinea. Most of the specimens for this clustering, slender, undergrowth palm were found in primary lowland to lower montane forest or swamp forest and occasionally in transitional moist/heath forest. Usually on alluvium, sometimes volcanic soils.

Conservation: There are no major threats to this species. There are general threats of habitat loss in the region due to logging and clearance of land for plantations, agriculture and pasture. This palm is within the boundaries of protected areas in the provinces of Papua and Papua Barat in Indonesia and Papua New Guinea. It is not listed on CITES and seeds from this species are not present in the Millennium Seed Bank, UK. This species has not been previously assessed, however, according to Barfod (pers. comm.) it is quite common and not threatened at all. Near Bona village in the Southern Highlands, Papua New Guinea, a specimen (Baker 626) was collected where a WWF Integrated Conservation and Development Project is in place. (IUCN-Red list) Editing by edric.