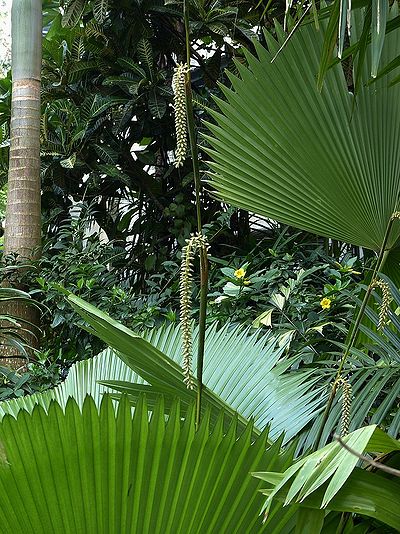 The palm we have reaches a height of about 3 m (9 ft) in 15 years. It can handle quite a lot of sun but not wind because of the large undivided leaf. It is best suited to a sheltered position which usually means shaded. Providing it is out of the wind it is very rarely marked in winter in temperatures down to 3 C. It is the most cold tolerant of the large, undivided leaf Licualas. Cold hardiness to 32 F.

"There is a world of difference between the case of Adonidia/Veitchia merrillii and Licuala peltata var. sumawongii. In the case of Adonidia merrillii and Veitchia merrillii we are all talking about exactly the same species. There is no ambiguity. It just happens that Adonidia is now recognized as being generically distinct from Veitchia and so Adonidia merrillii is the up-to-date name. We all still know what is meant by Veitchi merrillii. In the case of the two Licuala names, Licuala elegans is a small undergrowth palm from Sumatra that hasn't been seen since the 1850s and Licuala peltata var sumawongii is a totally different palm from southern Thailand. Licuala elegans applied to the latter species is just plain wrong and should be corrected over time - it's already a couple of decades since it was pointed out that the name was incorrect, yet people still go on using the name - not my fault!" (Dr. John Dransfield)

This is one of the few species of Licuala that can be grown successfully in So Cal (most are too tropical). It is also one of the most beautiful species having very large nearly completely circular pleated unsplit leaves on long, dainty petioles. These large leaves set it up for wind damage so plant in a protected spot. I have not had luck with this species as I have never lived in quite a warm enough climate. It does much better in tropical climates than anywhere in So Cal, but some protected gardens have nice specimens here. This is a native of Thailand and Malaysia. (Geoff Stein).

This is the magnificent and much desired, entire-leaved variety of Licuala peltata, sometimes erroneously also called Licuala elegans. It is a moderately sized palm with usually only a short trunk, and its crown holds as many as 15 huge, flat, undivided fan leaves up to 2 m (7 ft.) in diameter! "It won't grow where I live, it's too tropical" you might say, but you might be wrong. This species is much more tolerant of cool conditions than nearly any other Licuala and it will thrive in subtropical and tropical conditions and possibly even in protected spots in some frost-free, warm temperate climes, of course always out of the wind.