Vanuatu, on the islands of Vanua Lava (in littoral forest at sealevel on volcanic soils) 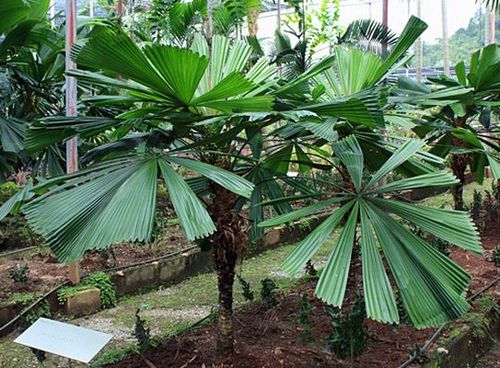 Etymology: Licuala cabalionii is named for Pierre Cabalion (born 1947), French ethnopharmacologist whose work in Vanuatu has been an important contribution to the Flora of Vanuatu Project. (John L. Dowe 1993)

A medium-sized fan palm native to the islands of Vanua Lava and Malekula, Vanuatu, in the South West Pacific, where it forms dense populations at low elevations in littoral forest and rainforest respectively. It grows a slender, solitary trunk to about 5 m tall which holds a spreading crown of large, circular fan leaves that are split to the base into several broad, wedge-shaped segments. (RPS.com)

Dowe, J. L. 1989a. Palms of the south-west pacific: their origin, distribution and description.