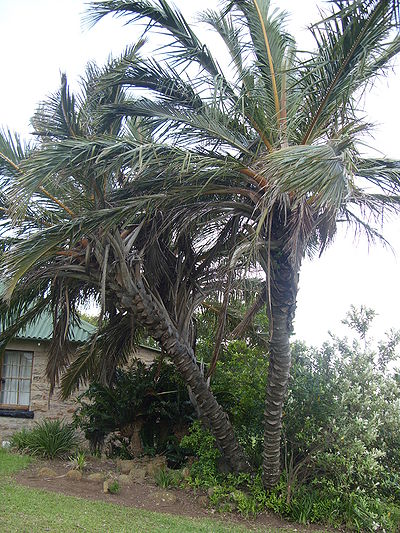 Transkei District, EC, South Africa. Photo by qgrobler
South Africa, and around the lower reaches of the Mtentu, Msikaba, and Mzintlava rivers. grows naturally on the banks of two rivers, only one in a protected area, in the Eastern Cape. In cultivation, it is occasionally seen on the south coast of KwaZulu-Natal, as far north as Durban. As it is restricted in nature to Natal-group Sandstone, it must be considered to be one of several trees only known from the Pondoland Centre of Endemism.

Likes a sunny, well drained position, with ground water. Very slow growing. Seeds are difficult to germinate, although more success is being gained by just covering the seeds with moist sphagnum moss.

In view of the limited natural population, which is already threatened by over-exploitation for horticulture, the single most important piece of advice for would-be growers of this palm is DON'T! The tree is protected and there is no legal source of seed. Seedlings are almost certainly raised illegally too, and one should not buy them without written guarantees of permission to possess them.

That said, the tree in the grounds of the KwaZulu-Natal Herbarium makes a very attractive feature of our garden. It evidently likes our warm, moist climate and sandy soil. With the possible exception of the resident weaver birds (see the section on ecology above) and occasional scientists from the University, we have seen no parasites on the tree, and smaller pests and diseases are unknown. It is, however, known that for some reason seeds do not germinate easily, and in experimental plantings in this country germination rates have always been low.

A multi-stemmed palm confined to the north banks of the Msikaba and Mtentu Rivers on the Transkei coast. Records from the Mzintlava River near Manteku have not been confirmed and it is possible that this subpopulation was destroyed by deforestation. (IUCN Red list: Vulnerable)

The species grows from just above the water level to the tops of steep forested sandstone cliffs, even in the salt spray zone. Reproduction from seed is poor, but plants sucker vigorously.

Both localities are declared national monuments and although they are in a designated protected area, there is no management and enforcement to ensure effective protection. This species is traded internationally on a small scale as an ornamental and over exploitation is a potential threat. The miniature coconut fruits are favoured by the local people and baboons.

This much talked about but rare South African palm will thrive in warm temperate as well as tropical climates. Related to Jubaea and Butia, it is a suckering coconut look-alike, grows to about 20 feet tall and is suitable for sun and also partial shade. Seeds take their time to sprout but eventually produce a long 'sinker' and should be planted in deep pots in a very well drained mix as soon as they have germinated. Jubaeopsis seeds are rarely collected as the palm is very rare in cultivation and, in the wild, grows on only two very remote sites. (RPS.com)