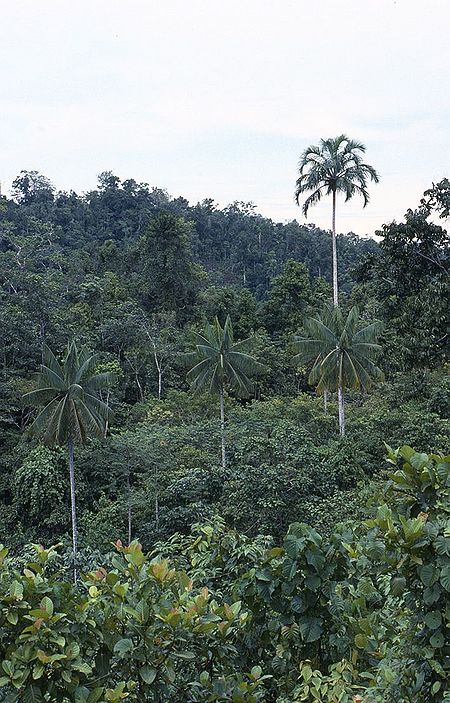 Biak, West Papua, Indonesia. Photo by Dr. William J. Baker, Royal Botanic Gardens, Kew/Palmweb.
and northeastern Queensland. H. costata is one of the most common and abundant palms in lowland New Guinea. The species occurs on mesic, well-drained soils in hilly terrain as well as in swampy or seasonally flooded situations.

Notes:—Hydriastele costata is the commonest lowland tree palm in New Guinea. It is immediately recognisable as a canopy emergent with a distinctive, spherical crown of more-or-less straight leaves with pendulous leaflets. Its highly distinctive longitudinally striped fruits with costate seeds are not seen in any other member of the genus. Hydriastele costata has a similar habit to H. procera and H. wosimiensis from the Longispatha group. Hydriastele costata appears to be most similar to H. moluccana, a rarely collected species known from North Maluku Province in Indonesia. Hydriastele costata is distinguished from this species primarily by its striped fruits with costate seeds (see Essig 1982). PETER PETOE, CHARLIE D. HEATUBUN & WILLIAM J. BAKER Phytotaxa 370 (1) © 2018 Magnolia Press

Conservation status:—Least Concern (LC). Hydriastele costata is widely distributed (EOO > 1,360,000 km2 ) and common. The AOO (136 km2 ) is higher than for most other species within the genus yet still likely to be a conservative figure. PETER PETOE, CHARLIE D. HEATUBUN & WILLIAM J. BAKER Phytotaxa 370 (1) © 2018 Magnolia Press.

In Queensland H. costata occurs in a few sites on the extreme north of Cape York Peninsula, in the township of Bamaga and through the "Four Mile Scrub" along the road to Somerset, along several streams draining into Newcastle Bay just south of Somerset and sporadically in various other sites in that region. Further south along the east coast of the Peninsula there are several populations around Iron Range in the Lockhart River region. Around Bamaga the palm attains its best form, it is a tall and very handsome single trunked tree reaching to 30 m or more. It favours moist places on seasonally flooded flats or on steep slopes in volcanic soils.