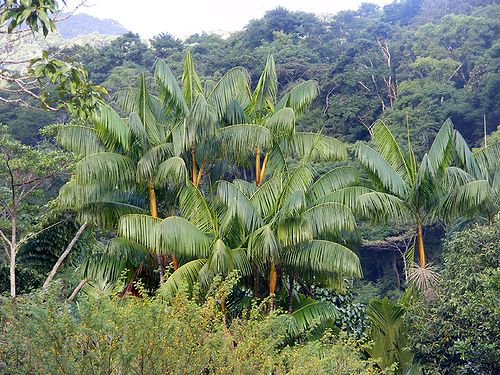 Euterpe sp. 'espiritosantensis' is one of the most impressive looking palm species in Rio de Janeiro is the solitary "palmito vermelho" from the mountainous habitat in the Southeast Atlantic forest. Kew still considers this species as a variety of Euterpe edulis with less number of fronds (9 to 14) and with a distinctive orangeish 1 meter long crownshaft. This species is endemic to a small habitat area, in Espírito Santo State, between 700 and 1000 m altitude and it tolerates (and prefers) cooler winters. Authors in Brazil (Fernandes, Lorenzi) now consider it as a separate species. (Gileno Machado) Editing by edric.

Gileno Machado has tried to acclimatize these palms up in Northeast Brazil, but they are slow growing seedlings this warm sea level location so far. One of his friends in Amazonia reported that they are growing fine for him, so he is optimistic that they can manage to survive and develop in warmer regions too. They are reportedly growing fine in Florida. The sprouts and first leafers look much darker than E. edulis from the beginning.

Another one of those palms that to the layman and hobbiest, appear to be distinctly different than the common Euterpe edulis, but for now, it is officially considered by Kew as synonymous.

"This Euterpe grows in the area of Espirto Santo state of Brazil which is north of Rio de Janeiro. The Euterpe edulis grows futher south and actually is found in sub tropical areas of Brazil. Even though the E. espiritosantensis grows in mountanous areas I do not think it ever gets below freezing there. So, I do not think that this would be a good performer in your climate. The E. edulis would be better. | would like to try this euterpe here. I think it would probably do ok in my climate here on the equator." (Don Kittleson)

"Orange crownshaft is a colourful form of edulis. Yellow crownshaft is now espiritosantensis. They are not the same palm but the seed was listed by RPS at the same time so that may have led to confusion. The leaf form is quite different, Yellow being vastly superior! Yellow is doing OK for me in-ground. Orange sucks in pots but we have had the driest summer in 50 years and Euterpe growth has been somewhat retarded. Shoved three Orange in the ground recently so will see if that helps them over winter. Euterpes don't seem to develop a good root system until planted for me. They start well in pots then go backwards. I've been holding off planting until they prove to be a little different but will lose plants if I don't get a move on." (Richard - New Zealand)